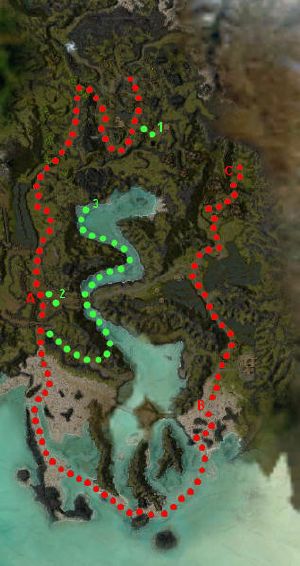 Secure a safe place for your people to settle.

Travel along the path, mostly south, killing undead until you reach the outpost.

Tip: Just before reaching the outpost, you will be blocked by a closed gate and a small patrol (the gate will open once the patrol is defeated). Unfortunately, several White Mantle have apparently died protecting the gate, providing ample minion fodder for the lone Zombie Warlock. However, he cannot support them for long and if you wait just a few minutes, the mass of minions will expire due to natural degeneration.

After speaking to Justiciar Toriimo (A on the map), continue through the gate and south along the beaches or across the bridge . Talk to Justiciar Hablion (B on the map). Help Hablion clear the swamps of the undead and kill the boss at location C on the map.

It can be quite hard to clear the swamps, even with the extra soldiers provided, since you tend to get overrun, and even player-controlled characters often stand in the poison water needlessly! If you get into trouble, run back to the soldiers standing above the swamp and they will help kill for you.

Note: Do not make the mistake of following Justiciar Hablion for the entire mission. He takes a different path than that of the main mission, and you will waste a significant amount of time if you follow him instead of his forces (it is very clear when they split paths).

Note: It is not actually necessary to speak to Justiciar Hablion at all. Simply clearing all the Undead out of the swamp will trigger the end-of-mission cutscene. Note that if Hablion dies, the mission fails!

To get this bonus, you have to talk to a pig (Oink) who is found to the left behind the gate at the very beginning of the mission (1 on the map). Return him to his owner in the village: the little boy Cheswick, son of Orrian Historian McClain (2 on the map). When approaching them, do not talk to either, as this has broken the bonus on at least one occasion. Instead, wait for the conversation between them to finish; the son will then say, "thank you for returning Oink," and the bonus objective will be added to your quest log.

Collect the tome from a chest in the water at the north end of the fjord (3 on the map) even though the father will tell you it is in a cove to the southwest, and return it to the historian in the village. Be careful, as opening the chest will trigger some quite high level Smoke Phantoms (3 at a time). You will also be ambushed twice more in the fjord while returning the tome to the historian.

Tip: The easiest way to get past the Smoke Phantoms is to have the whole party retreat to the beach after clearing the way to the chest, and have someone with a run skill fetch the text. He can simply outrun the phantoms without being hit more than a couple of times.

Tip: If you fight the Smoke Phantoms, make sure that the one who's going to pick up the tome knows to drop it immediately. This ensures that the whole party is ready to fight. The Phantoms' most deadly spell is Chain Lightning, but it loses effectiveness if it only hits one target. Therefore, do your best to spread out to minimize the damage (this is especially relevant to "soft" targets). Use AoE interrupting skills, such as Maelstrom and Meteor Shower, as soon as the phantoms spawn. These skills are effective at shutting down the phantoms and make the fights much easier. Additionally, try other caster shutdown skills, such as Power Block and Broadhead Arrow.

Tip: A very cheap way to complete the bonus is to grab the text and then kill a Mergoyle or other nearby enemy on the cliffs above the water. Now use Necrotic Traversal or Consume Corpse. You will be teleported up and out, thereby avoiding the Smoke Phantoms altogether, and it is an easy run back to McClain.

Tip: You don't actually have to return Oink to Cheswick to start the bonus. It may help to take him along with you and help tank the Smoke Phantoms. Bring him back along with the book and finish both objectives at once.

Due to the large amount of undead, consider taking skills that deal holy damage. Heart of Holy Flame will let any martial weapon user deal double damage, and is completely usable by a dervish secondary without points in Mysticism.

The only part that is dangerous in hard mode for a group with substantial holy damage is right after talking to Justiciar Hablion. He will charge ahead into a big mass of mobs, and the other NPC allies trail back quite a ways. Unlike in normal mode, he is no longer much higher level than the mobs, so this can get him killed.

The first big collection of mobs is about four separate linked groups that you can pull one or two at a time and easily kill before talking to Hablion. The second starts out as separate groups, but they run together when you approach, making them potentially difficult to clear before talking to Hablion. If you flag henchmen and heroes way ahead to aggro the group that moves before it gets to the group that does not, you can keep them separate, making it easy to pull and clear one group at a time. After the second large collection of mobs, Hablion runs off to the west and is safe, so you might as well go trigger the cut scene to get help from other White Mantle.

Farmer: Help! The dead are walking out of the swamps.
Head west to the gates of Lion's Arch and warn them. LOOK OUT!

Recruit: This is bunk. Stuck here while everyone else is out fighting.

Veteran: Be patient. Your time will come.

Recruit: Yes, sir. It's just that I feel so powerless here.

Veteran: I understand. But keeping this location safe is also important.

Recruit: Not as important as sending all those dead men back to their graves. Do you think this will be like the standoff at the Temple of Mercy?

Recruit: Is it true these undead all come from Orr?

Veteran: That'll be enough, soldier. Stay on your guard. If Hablion doesn't return soon, we may be in for a fight.

Veteran: You've heard talking, huh? What have you heard?

Recruit: Well, that their uniforms look like those of the old Orr army. Sir?

Veteran: Hmm...It's true. There is a resemblance. Still, it's not wise to believe everything you hear.

Josephine: You've got to be kidding me.

Josephine: Four gold for a head of lettuce?

Merchant: It's supply and demand.

Josephine: Well, then I demand my money back.

Merchant: Look, Joe, my whole crop was trampled by those ghouls.

Josephine: I don't care. I won't pay that much.

Merchant: Suit yourself. All right, look, how 'bout I give it to you for three gold?

Josephine: Three gold? For that much, I could clothe my entire family!

Merchant: Then, what would you pay?

Both: I'll give you three heads of lettuce for four gold.

Cheswick: Dad, when will we be able to go back to our home?

Orrian Historian McClain: When the White Mantle have made sure everything is safe.

Cheswick: Do you think my pig will be safe?

Cheswick: Where are all these strange people from?

Orrian Historian McClain: They're from over the mountains. From Ascalon.

Cheswick: But I thought Ascalon was destroyed.

Orrian Historian McClain: Me too, son. Me too. How you holding up?

Cheswick: Dad, when this is over, do you think we can go float some flowers for Mom?

Cheswick: Can we light the candle, too?

Cheswick: Thank you so much for finding Oink!

Orrian Historian McClain: You found Oink! You've made my son very happy. Maybe I can return the favor.
There's a shipwreck, in a cove southwest of here. It looks to be an old Orrian ship. If you find anything of interest down there, perhaps I can help you identify it.

Orrian Historian McClain: As I thought, this is an old Orrian text. It's a passage from the Memoirs of Thaddeus LaMounte.

Justiciar Toriimo: Lion's Arch is sealed by order of Justiciar Hablion. He's going to the south to deal with an invasion of undead.

Justiciar Hablion: You've arrived in Kryta at the wrong moment friend. I don't have time for long speeches, but I'll make you this deal: help me fight these Undead, and I'll give you and your people passage into Lion's Arch.

Justiciar Hablion: I'll take the high ground, above both sides of the entrance to the swamp. If you can lure the bony bastards out, we'll rain hell down on their heads.

Justiciar Hablion: Be at peace, brother. May your soul find peace in the Mists. Your bravery is unquestionable, your honor unmatched. On behalf of the White Mantle, I thank you greatly for your service. Our founder, Saul D'Alessio himself would have been proud to call you his friends. As promised, your request for entrance to Lion's Arch has been granted. You and your fellow Ascalonians are welcome here. Come, I will escort you to town personally. We will make sure you receive a proper reception. Welcome to Lion's Arch.

White Mantle Carrier: I found it! The Scepter of Orr!

White Mantle Soldier: Thank Dwayna we found it first. If the undead get this...Come on. The sooner we get the scepter into safekeeping, the better.

White Mantle Soldier: The undead. We're under attack. We can't let them get the scepter. Make haste to the Temple of Tolerance. Take the scepter to Confessor Dorian. We'll hold back the undead for as long as we can.

Undead Lich: Run you little fool. Run. I have all the time in the world. The scepter will be mine again soon enough. Everything proceeds according to the prophecy.