For information on the mission, see Gates of Kryta (mission).

Once embroiled in a devastating war with Orr and Ascalon, Kryta is now the only thriving human kingdom left on the continent of Tyria. Travelers venturing here from over the treacherous Shiverpeak Mountains will find themselves in the foothills outside the grand city of Lion's Arch.

Follow the directions of the quest To Kryta: Journey's End, acquired from Aidan in Griffon's Mouth. From there, head southwest into Scoundrel's Rise, then continue southwest to this location.

Alternatively, travel North along the Eastern edge of North Kryta Province from Lion's Arch, through the portal in the north-east corner into Scoundrel's Rise. Head South to this location. Going this route, and running with anti-hex and health skills should take just a matter of 5 minutes or so with hench as foe distraction. 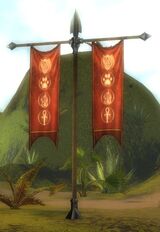