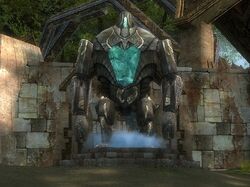 This quest consists of two stages. The first stage is to protect the Northern Golem Kiln and the Eastern Golem Kiln from the Destroyer attackers while they warm up to full operating temperature. Gadd will assist at the eastern kiln, while Oola assists at the northern kiln. Should Gadd, Oola, or Sokka be killed, they will resurrect once the area is clear of enemies. The destroyers will attack the kilns in groups of two at slightly staggered intervals. Each pair contains one warrior and either a ranger, necromancer, or mesmer. Five pairs of destroyers will attack each side in all. With about one minute bewteen waves, you shouldn't have any trouble killing the first pair before the next arrives.

One strategy for this stage is to split the party and defend both kilns at once. With multiple players, you can split a party to have four party members to defend each kiln. It is preferable that every hero at a kiln be controlled by a player at the same kiln. A single player with henchmen and heroes can flag the henchmen at one kiln while he and his heroes defend the other. Since the destroyers only attack in pairs, the reduced party size isn't much of a problem, as long as each half-party has a good balance of healing and damage output.

Four henchmen defending a kiln by themselves can get into trouble for a variety of reasons. Gadd or Oola can get stuck and not fight, leaving the side shorthanded. The destroyer rangers can fire on henchmen from far enough away that the henchmen AI to go attack doesn't trigger. Line of sight issues can block attacks, decreasing their damage output to the point that they are unable to clear one wave of destroyers before the next comes. If henchmen have to defend one side on their own, then watch their lifebars, and if they're still taking damage too long after one wave of destroyers arrives, you may need to leave your heroes and go help out.

After the kilns are warmed up, the destroyers will stop attacking, and you can speak to Sokka to get an Asuran Beacon. When you drop the beacon, a G.O.L.E.M. 1.0 will be summoned to that location. You have to wait a certain time after using a beacon for a second G.O.L.E.M. 1.0 to be produced, and you can only have two G.O.L.E.M. 1.0s active at a time. Each golem will follow whoever summoned it, and that player can speak to the golem to make it hold position if you need to.

On the other side of the hill is the hive, with a number of Destroyer Spawns and two Bringers of Destruction. The bringers can be pulled out of the ashy area and killed without triggering any of the spawns, which will hatch into fullsize destroyers. When both Bringers of Destruction are dead, a cutscene will play, and the party will be returned to Rata Sum.

An alternative approach with using heroes and henchmen is to not have the Destroyers get close to the golems at all. This can be done by ignoring the first quest marker where Sokka is and turn left and go around the quest marker to the left bridge. Some destroyers will come towards you, so approach carefully. Kill off every destroyer in the area and flag your heroes and henchmen near the southern edge of the burnt area where the Bringers of Destruction would spawn and run off to the quest marker to activate the attack. The attacking Destroyers will spawn at the burnt area, but will have their tracks stopped by your heroes and henchmen. You may need to be quick and might need to use skills that increase your movement, as the heroes and henchmen may not able to survive long without your presence. Although you will end up facing four destroyers at the same time in the same area, this can ensure you that the destroyers would never get a chance to attack the golems since you and your party is located near their spawn point. Once the kilns are warmed up, flag your heroes and run back to talk to Sokka and simply kill the two Bringers of Destruction.

If bringing henchmen and heroes, hard mode means there is quite a bit less leeway for error on the henchmen side while powering up the golems. Because the bridge by the eastern golem can block line of sight, it is better to put the henchmen party at the start at the northern golem while you and your heroes take the eastern one.

After you have golems, some groups of destroyers will run long distances when you are still a ways off. It helps to approach but not pull and wait for a group to come, rather than running up to one group and getting another group further behind it to come running into range, too.