Location: Holdings of Chokhin, just inside the Halls of Chokhin
Collecting: 5 Geodes

Garden of Seborhin
Go out of West exit of Tihark Orchard into Forum Highlands and then zone into Garden of Seborhin. Go to your right (East) past the resurrection shrine. There is usually a group of 4 Enchanted Brambles and 1 Whistling Thornbrush. Killing them makes it easier to deal with the beetles when they come. Kill the 4 beetles (usually 3 Rain Beetle and 1 Rock Beetle) and then move along the path further East-North-East until you come to the space between two outcroppings. There should be a group of Roaring Ether to your East. You probably want to avoid them if you are solo farming. Slide past along the rocks to the left and it should make another group of Beetles spawn. Rezone and do again. You should be able to do 10 runs in less than an hour and expected drop is one Geode per run. 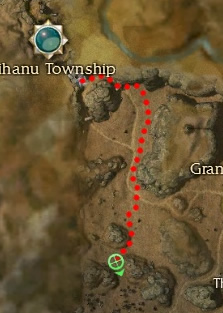 Farming in the Mirror of Lyss

Mirror of Lyss
From Mihanu Township, go a short distance along the north wall to a group of beetles. Continue south, following the path on the map at right. At the end, you can rezone at The Kodash Bazaar, then make the run in reverse.