Gift of the Djinn 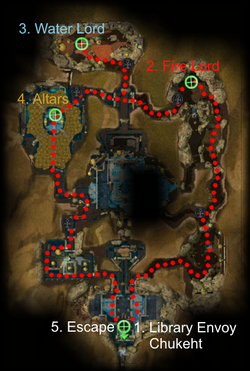 Possible route for the quest

"Ah, you are the heroes who solved the secrets of the Hidden City of Ahdashim, yes? I have a lucrative proposition for you. Through a scholarly connection, someone from the Halls of Chokhin who shall remain nameless, I am aware of a valuable item stored inside the Hidden City. Known as the Gift of the Djinn, this treasure is worth an untold fortune. Help me recover it and I'll make it worth your while."

"We must gather two items to unlock the Gift of the Djinn: an Essence of Pure Flame and an Essence of Pure Water. Each must be culled from the slain djinn lord of that element. With the essences in hand, we must then convene at the altar in the central vault."

Library Envoy Chukeht: "Let us move with haste! The Gift of the Djinn awaits us!"

Library Envoy Chukeht: "Finally, we have both of the essences. Now we must place them on the altar inside the central vault."

Library Envoy Chukeht: "The anticipation is almost unbearable! Quickly! Place the essences on those altars. I can almost feel the treasure in my hands!"

Library Envoy Chukeht: "I can barely catch my breath. Let us press on to Mihanu Township. It'll be safer there."

"I must apologize for my blunder. Upon further examination of the details, it turns out the treasure isn't the Gift of the Djinn, but rather the Gift OF Djinn. Amazing how the omission of one little word changes everything, yes? On the bright side, I did manage to net several works of art from inside the vault. Your time is worth this much, I think."

After accepting the quest, map travel to Dasha Vestibule, and speak to the Key of Ahdashim to gain entrance into the Hidden City. You will find Chukeht just inside, talk to him and he will start following you. Note that there is one popup group on each side roughly around the areas where the visible mobs are patrolling, so be wary of them. Since you may have to flee later on, it's wise to clear this area.

You will encounter numerous Djinn during this quest. When fighting them, always take out the Ruby Djinn first, followed by the Sapphire Djinn, and lastly the Diamond Djinn. Against Roaring Ethers, the party should spread out to reduce the damage from Energy Surge.

The Fire Lord can be found at the north-eastern corner. You can reach there by leaving north through the center path all the way to Noben (the merchant) and then turning east, or you can take the eastern pathway and then head north. The center path would have less mobs. Along the way, carefully pull to avoid aggroing multiple groups.

Head back to the intersection and this time take the western path to the altar. Watch for a fire trap at the top of the ramp, as you enter the vault room. Before touching the altars, clear out all the mobs in the central area, including the patrols on the bridges and the southern exits. The moment both altars are lit up, a group of three Djinn will spawn on each bridge, charging towards you. Start running south all the way to the exit. As soon as you and the Library Envoy reach the exit, the quest will complete. Talk to him again in Mihanu Township to complete the quest.