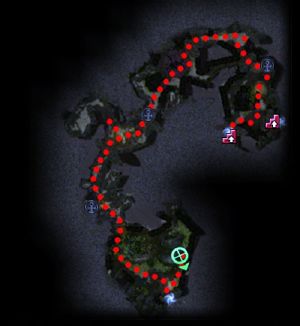 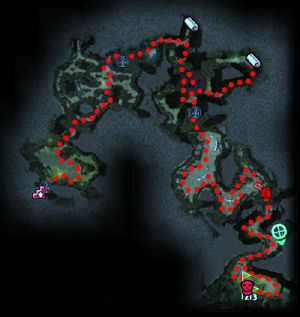 "The red Gokir frogmen were recently displaced from their natural homes due to that bumbling Tekks's fuzzy math! This normally wouldn't concern me, except I'm doing important research. I believe the freshly-secreted slime off a Gokir's back can be used to create new fuel for my creations! To my dismay, they relocated to this cave, the traditional home of the yellow Ophil tribe. Now, some ridiculous tribal war has brought my research to a screeching halt. I couldn't care less about the beasties either way, but Gokir don't create slime once dead, and the day-old junk just won't do. So be a good little bookah and destroy the Ophil leader, Khabuus. Without tribal leader, they should flee, giving me the chance to get back to work. I'll make it worth your while... what do you say?"

Accept: "Tekks isn't the girl for me. Count on me for the red team!"
Reject: "No way! I know what frog slime is really for.."

"Excellent. This research will not only make me rich, it will be a boon to all humanity... if not frogmanity. Now, to find a Norn to go collect the slime."

See Tekks's War, both quests have identical maps and share very similar Walkthroughs. Khabuus is tough to kill but does not heal very fast. Wipe out all the guards around him first then pound on him relentlessly.