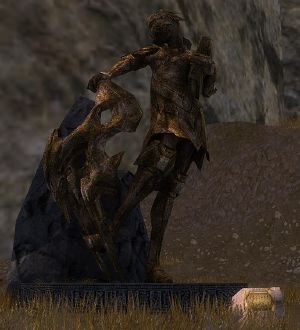 Statue of the Goddess of Truth in Chantry of Secrets, leaning upon Abaddon's broken crown.

Kormir, the Goddess of Truth is the immortal incarnation of Kormir, the former Spearmarshal of the Order of the Sunspears. After having defeated the fallen god Abaddon, Kormir absorbed the divine power that was released, sacrificing herself, and thereby became an immortal god, taking over from Abaddon the powers of the God of Knowledge and Truth.

This inscription can be found on the Statue of the Goddess of Truth in the Chantry of Secrets:

Another statue of Kormir can be seen in Turai's Procession during the Nightfall campaign's epilogue cinematic. In the 2007 Dragon Festival Emperor Kisu prayed to Kormir.