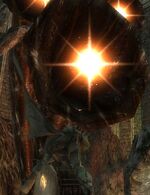 The Gods' Vengeance is a weapon being developed by Master Architect Gunther of the Kurzicks to help give them the upper hand in their constant war against the Luxons. It requires large amounts of Amber to operate.

The weapon resembles a giant drum with a stone dragon perched atop it and a huge horn coming out of it which hurls fiery projectiles. When firing, the dragon beats the drum with its tail, which causes bright runes to appear on its surface. When all four runes appear, the weapon fires.

Upon completion (Kurzick side wins the mission), the weapon is seen in a mission cutscene where it is used to blast one of the Luxon ships to cinders. However, the cutscene doesn't run anymore in both PvE and PvP.

However, if Gunther is killed (Luxon side wins the mission), the weapon is seen in a mission cutscene where it falls to pieces (the stone dragon falls apart) The Luxon ship is shown as untouched.