"In my youth, my family lived in a small village on the northeastern coast of Shing Jea Island. That is, until the Naga burned down my village and slaughtered my loved ones. At first I constantly questioned the gods why I was left behind, but then it came to me: I was left here to revenge [sic]] my family's death. It is my duty, given me by the gods, to destroy the Naga and everything they hold dear. If you kill any of these abhorrent beats, bring me their pelts as proof. For 3 Naga Pelts, I will give you this in return:" 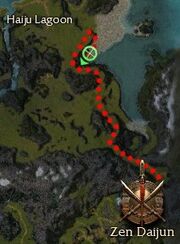 This character's name appears in the 1954 Akira Kurosawa movie, Seven Samurai. The other characters that appear in Factions are Guardsman Kikuchiyo, Kyuzo and Shichiroji. There are also minor characters in the movie called Manzo and Yohei, although it's possible that these two may have been coincidentally named.