From GuildWiki
(Redirected from Grand Court of Sebelkeh)
Jump to: navigation, search 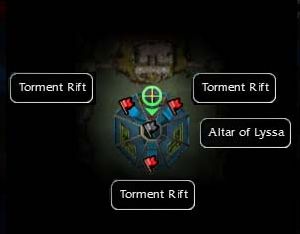 Tahlkora must be in your party to enter this mission.

The Altar of Lyssa must not be captured by The Blasphemy.

The rewards for this mission are based on how quickly you complete the mission.

The altar and rifts each have a bar indicating ownership, with red being owned by mobs and black by your party. They are considered to be controlled by whoever most recently had a full ownership bar. At the start, you own the Altar of Lyssa, while the mobs own the rifts.

The various capture points can be claimed by standing near them. Each character of one side standing near a capture point grants one pip of ownership movement on the bar. Characters of opposite sides can cancel each other out, and the net rate of ownership change cannot exceed four pips. One exception, however, is that while The Blasphemy is trying to claim a rift or altar, it will have permanent +1 pip in his direction, and your standing near it will have no effect until The Blasphemy dies.

When the mission begins, you will be in a teleportation circle at the end of a narrow passage directly north of the Altar of Lyssa. As soon as any party member leaves this circle, the first wave of Margonites will trigger. A total of six Margonites, two from each of the three rifts, will rush the altar and begin capturing it. The party must position themselves near enough to the altar to cancel this capturing effect - 8 party members can easily override 6 Margonites - and then kill off the Margonites.

When you have killed both of the Margonites that came from a certain rift, a second pair from that rift will trigger and move towards the Altar. That is, the second wave comes piecemeal, with the parts from each rift potentially coming at different times. In no case will more than six Margonites from the first two waves rush the center at once.

However, if you go to one of the rifts, you can aggro and pull additional Margonites before they would normally come. As such, it is useful to flag your party at the center of the altar, to prevent henchmen and heroes from running off to aggro additional mobs.

Note also that if you aggro Margonites that are running to the center while you run to the center yourself, that also aggroes any Margonites near the ones you aggroed, even ones that would normally stay back for a while. This can be avoided by moving slightly when you enter the mission to make the first wave of Margonites approach the altar, then waiting for them to move to the altar, and then running there yourself. If you do not do this, some extra Margonites may come early, which can overwhelm a party.

After all twelve Margonites in the first two waves are dead, The Blasphemy will begin to spawn. It will appear at a random rift and move to the altar; once there, it will use Summon Torment to "jump-start" capturing it. This will also partially reclaim ownership of any rifts that you have already captured.

Sometimes The Blasphemy will not go to the altar, but instead to a rift you have already captured and attempt to re-open it. This can complicate the mission somewhat. However, it can also be advantageous - simply set one hero to Avoid Combat and plant his/her flag next to that rift. This will cancel The Blasphemy's effect on the rift's capture bar, and you won't have to kill The Blasphemy until after you have captured both other Rifts.

Ignore The Blasphemy when it first spawns and move to capture one of the rifts. It will be guarded by three Margonites and a Torment Claw, all of which you must kill; otherwise, even a single one will be able to re-open the rift after you have left. It is very beneficial to have the entire party move near the rift (but away from the Claw) so you can begin capturing it while you are killing the enemies.

The Torment Claws use the Torment Slash skill, which can be very devastating if the party is bunched in front of the claw; however, since the claws are stationary, casters and ranged attackers can simply avoid the claws entirely. The skill is also very easy to interrupt, due to its long activation time.

Master's Reward for this mission is obtained by completing it in under six minutes. One way to save time is to flag your party near a rift as soon as you approach it to capture it, so that by the time you kill the mobs, you will have fully captured the rift. If you are going to do this, make sure that you interrupt Torment Slash. It also helps to kill the Torment Claw first, so that it can no longer use Torment Slash.

Another way to save time is to leave one mob from the first two waves that rush the center, killing only 11 of the 12 Margonites, as this will delay the spawn of The Blasphemy. Go capture a rift while leaving the center alone, then go reclaim the center without killing that one mob. Go capture a second rift and The Blasphemy will finally spawn, but with only one rift left for you to capture. At this point, you might as well kill the last Margonite in the center, too, and then finish the mission as normal.

The same tactics as above still work. The main differences are that it is more important not to pull extra mobs at the start, before they're inclined to come on their own, and not to kill The Blasphemy while already fighting other mobs. If one or more players take too long to load the mission, you may have to restart, as missing part of the party can make it very hard to hold the center area.

You get twelve minutes for master's reward, which is far longer than the mission should take, so there isn't any time pressure. It will be simpler if you don't try the "leave one Margonite alone" approach, but just kill all of the Margonites that come to the center at the start as they come.

Tahlkora: We're almost out of time. We have to stop the Blasphemy from claiming the Altar of Lyssa or all will be lost!

Tahlkora: We must close the torment rifts or the Blasphemy will return even after we defeat it!

<party leader>: The beast is dead.

Morgahn: But its mistress still lives. She goes to finish the spell.

<party leader>: Where is she going?

Morgahn: Into the Desolation, to the Mouth of Torment. She seeks to unleash her dark god on the world.

<party leader>: Then we will go after her.

Morgahn: Please. My blind devotion has doomed my nation, my faith, and my soul. I must help to stop her!

<party leader>: I understand, but no.

Tahlkora: You and your friends took me in and taught me to be a hero.

Tahlkora: You gave me the chance to do the right thing.

Tahlkora: Can we deny him the same chance?

Morgahn: I am a general no longer. Only a man.

<party leader>: Morgahn, then. You may come with us. You shall have your chance to redeem yourself.

Morgahn: You will not regret it.

<party leader>: We'll see about that.

Varesh Ossa: Dead. Morgahn was more resourceful than I thought.

Margonite Reaper: We should go back and slay them all!

Varesh Ossa: No. Abaddon calls me. I can feel him call me.

Margonite Reaper: This world is wounded and will be swallowed by Torment.

Varesh Ossa: With Abaddon's blessing, we shall cross the sulfurous wastes and return the dark god to his throne."

Varesh Ossa: Hail Almighty Abaddon. This world will be yours.

Narrator: As Nightfall stretches across Elona . . .

Narrator: The Sunspears must pursue Varesh . . .

Narrator: Into the wastes of the Desolation.