Grothmar Wardowns is an explorable area in the Charr Homelands. It is bordered on the west by the slopes of the Far Shiverpeaks, and on the east by a lake with an odd island in the middle that many believe to be the Dragon Kralkatorrik. Between these two, the terrain is mostly open plains, with the exception of a forested valley that takes up much of the south-eastern quarter that is infested with Mantids, a number of steep hills in the Northwest, including a valley that the Charr have used to set up a base, and a river running south to north through the western portion of the Downs.

Location of the Siege Devourer 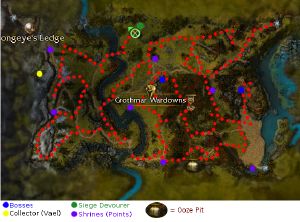