Guardsman Kinri is in involved in the gathering and burning of plagued bodies.

"What am I doing down here? I think I have the worst post of any city guardsman, burning plagued corpses. Perhaps it would not be so bad if the bodies stayed put...and the smell were not so wretched."

The easiest way to get to Guardsman Kinri is to start from the Tahnnakai Temple and follow the path on the map. There will only be 1 or 2 small groups you have to fight on the way. 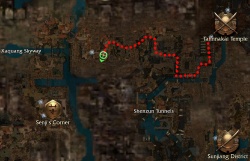