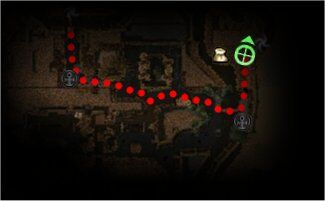 Location from north entrance (from Bukdek Byway to Undercity)

In the Undercity (before completion of Mayhem in the Market):

"By order of the emperor, none shall pass!"

In the Undercity (after completion of Mayhem in the Market):

"You enter this quarter at your own risk. Was there something else you wanted to discuss?"

In the Undercity (for foreign characters):

"Master Togo left specific instructions that I am to admit only students once he is finished speaking with the emperor. You do not have permission. I suggest you head over to Kaineng Docks and speak with Master Togo. Last I heard, he was traveling with Headmaster Greico."

The briefing for the Vizunah Square mission:

"Master Togo has sent word to Mhenlo of Tyria. He is Togo's prize student from years ago. In fact, Togo has not held another student in such high regard until you came along. Hopefully, he can help us in our time of need.

Remind me again, what happened in Cantha?

"You, along with Togo and headmaster Vhang, tracked down and eliminated the source of the plague. You took it upon yourself to inform Yijo's mother of the plague that consumed her son, but it seemed as if she already knew. Togo has sent you the [sic] city to investigate the sickness, as he is not convinced that your victory at Zen Daijun purged the land of its ill effects. In the meantime, Togo is visiting Raisu Palace to consult with the emperor."

What is going on in Vizunah Square?

"You are here to join up with Mhenlo, one of Togo's former students. With any luck, Mhenlo has made haste in his travels and brought company; the plague is causing more damage than anyone expected."

Do you have any information you can share about the task at hand?

"1. Plague creatures explode upon death. Anyone nearby will suffer damage.
2. Protection and self-healing skills are crucial tools in the battle against the Afflicted.
3. Keep Master Togo and Mhenlo alive; without them, all is lost.
4. Be prepared to suffer numerous Conditions."