Guide to Item of the Week Farming/Previous Tips

From GuildWiki
< Guide to Item of the Week Farming
Jump to: navigation, search

You can start from Jokanur Diggings or The Astralarium, then head to the tip of the peninsula that lies north of the eh in the word Zehlon Reach on the map. Starting in the Astralarium allows you to exchange your fins for soup before heading out.

Note: There are half a dozen zones that spawn the skale that drop the right type of fins. Any of these areas should be easy enough for L20 characters, no matter which profession. Spikes or AoE skills are more efficient, but nearly any skillbar will get the job done this week. Note: expect more fins drop in NM; hard mode drops tend to be worth more than 5

.
Zehlon Reach
Exit Jokanur Diggings and knock off the first 6 insects. Then, navigate through the swamp water (see map), avoiding any non-skale that might slow your progress. Bring a self-heal or hex removal; the only serious threat is the degen skills of the necromancers. Expect 8-12 fins per 10 min run.
Fahranur
There are a large number of easy skale near the city's entrance; the narrow passages make them easy pickings for AoE damage.
Plains of Jarin
Exit The Astralarium and travel north east around the large hill; there will be 3 skale there; kill them, then resign. The entire run using a IMS takes around 45 seconds to complete. If desired from there the player can turn south and continue along the water way.

Note: Iboga Petals are also dropped by Mirage Iboga in Kourna and Vabbi, but the Fanged Iboga are much easier to farm due to their lower levels.
Plains of Jarin
There is a dense gathering of iboga northeast of the Sunspear Great Hall.
With the quest Material Girl active, multiple groups of Killer Iboga will spawn in the southeast area.
Cliffs of Dohjok
The quest Scholarly Affairs will spawn multiple Beautiful Iboga for faster farming. 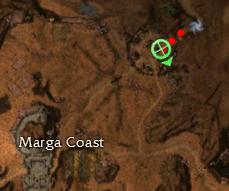 Location of Lormeh the Artisan

Marga Coast
Lormeh is an easy-to-reach Elonian Leather Square crafter; he's just outside the south exit of the Sunspear Sanctuary.

Crafting costs are as follows: 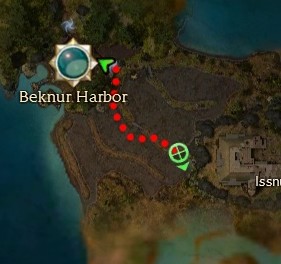 Plains of Jarin
There are four Irontooth Drake: two are located south of Sunspear Great Hall and two are located east of The Astralarium. There is a small distance between these points and running skills are recommended. Low level creatures.
The Floodplain of Mahnkelon
Use the quest Drakes on the Plain: you have to take Koss with you, but if you want to get all the drops, you can flag him off the radar to the south. The first two groups of drakes consist of Irontooths and Steelfangs only.
Issnur Isles
Short run to a group of 2-3 Irontooth Drakes from Beknur Harbor.
Rilohn Refuge (mission)
Flag Master of Whispers to the north, then run south (do not trigger Dejah). After fighting one group of beetles, you will find two groups consisting of 4 Steelfang Drakes. There is also a third group nearer the waterworks, but you have to run past or kill one or two groups of Kournans.