From GuildWiki
< GuildWars.com news
Jump to: navigation, search
The content of this page, news item, image or update note is copyrighted to ArenaNet - it is not released under a creative commons license and is used by GuildWiki by fair use only.

We're proud to announce the winners of our annual Guild Wars Halloween Art Contest! It wasn't an easy choice—we received a ton of great submissions in a wide range of creative media, from ink and paint illustrations to photographs of homemade costumes to pumpkin sculptures—but in the end we narrowed the list down to these ten talented individuals. Congratulations to our prize-winning finalists, and on behalf of the Guild Wars Team and Mad King Thorn, thanks to everyone who participated. Happy Halloween!

In October tournament news, We Want Cookies [NOW] defeated The Cape Is A Lie [Trim] to become the new champions. For Hero Battles, May's second place competitor Vi Ru edged out Scoutmaster Sihoe to claim the winner's seat for October. We extend our congratulations to all competitors! You can find this month's skill usage charts, GvG results, and 1v1 results here.

We will be updating the tonic in the Zaishen Chest today. To find out the tonic flavor for November, check the Zaishen Rewards Calendar.

For those who have placed their bets in the Xunlai Tournament House, tournament reward points will NOT be distributed at this time. Instead, points will be available after the November 13th live update.

MMO Portal has put together its 3rd annual one-of-a-kind calendar, featuring autographed artwork from the hottest released and upcoming MMO's—including Guild Wars! As always, 100% of the proceeds go directly to St. Jude Children's Research Hospital to help in the fight for children's lives.

Head over to http://www.mmocalendar.com and order yours today! 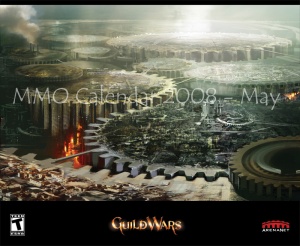 The May page of the 2008 MMO calendar

Interested in a behind-the-scenes peek at the creative storytelling process that brought you Guild Wars (and is currently hard at work bringing you Guild Wars 2)? Surf on over to Ten Ton Hammer's exclusive interview with ArenaNet Writing Team Lead Bobby Stein. Bobby has a wealth of experience as a gaming industry writer, and he's up to his elbows in the intimate details of the Guild Wars storyline. He's also got strong opinions about the right way to develop and present a great story, and he's not shy about sharing them. Check it out today!

For a limited time, buy any Guild Wars campaign via PlayNC.com or the Guild Wars in-game store, and get a second campaign for half-off! This is your chance to catch up on any Guild Wars campaigns you might have missed, and to access to the golem hero M.O.X. (who is only available to players with all three campaigns active on their accounts). Check out the full details and complete your campaign collection today!

Give the Gift of Guild Wars!

Giving the gift of Guild Wars has never been easier! The original Guild Wars is now available at North American 7-Eleven stores as a $20 game card. Slap it in a Holiday greeting card and you're done!

To find a participating 7-Eleven, check out their store locator.

Amazon.com is offering gift bundles featuring every Guild Wars release to date, for one low price! Each bundle contains all three Guild Wars campaigns and Guild Wars: Eye of the North, plus a limited edition art print. Choose one of the three gorgeous iconic images, make your purchase, and you're ready to go with all the Guild Wars there is!

Don't miss the Penny Arcade online store's holiday sale on select Guild Wars merchandise! From November 26 through January 5, score any or all of Penny Arcade's Guild Wars t-shirts and art prints for 15% off.