This talk page should be used for discussions regarding GuildWiki in general. For anything directly relevant to the Main Page or the edit copy, please use Talk:Main Page/editcopy. If you have any questions that aren't relevant to a specific talk page, head over to GuildWiki:Request assistance and add it.

In case anyone's interested, I'm almost ready to overhaul our crafting material pages. Join the discussion if you have any opinions about it. —Dr Ishmael

Me as miniature, and miniatures as me :o??? Bug

When I logged into Longeye's Ledge, I was confronted with a very funny bug, and took many screens from it... and I dunno if you know this or not, but I never have seen this standing anywere on the wiki, so I'll put it here: 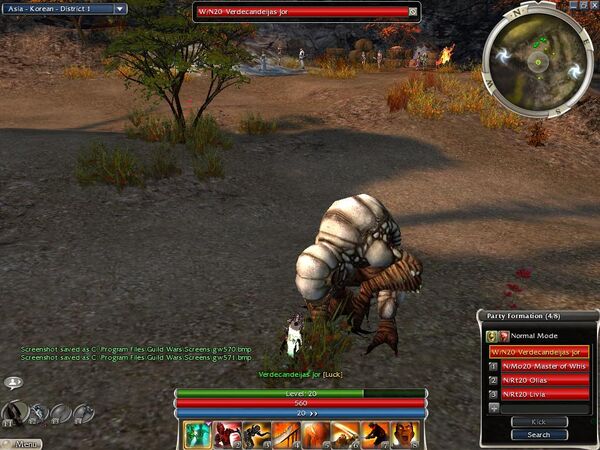 Omg, I still am as miniature whenever I load into a town... Wtf is this?—The preceding unsigned comment was added by Jorre22225 (contribs) .

I've never seen this exact bug, but I have seen the opposite where your character enlarges. Playing in the crystal desert some years back, my warrior continued to run off a ramp into the sky and kept getting larger as he ran. It was rather amusing and if I dug around, I probably have a screenshot somewhere of it where my character is standing on the heads of my smaller allies. :P --

Sup guise, i've just spotted Lynx as a lvl20 hostile in Cursed Lands. I'll add the revelant (relevant? revenant? whatever...) info to the article, and if anyone feels like it belongs somewhere else, then just split it or something. Kthx.--Rotfl Mao 15:52, April 9, 2010 (UTC)