From GuildWiki
(Redirected from Guild Panel)
Jump to: navigation, search

Guilds are the primary community connection of Guild Wars. They're used in the Guild versus Guild GvG battles.

You don't need any members to create a guild, and being part of a guild isn't at all necessary to fully enjoy the world of Guild Wars. However, being a part of an active guild can add another element of teamwork to the game, and climbing the ladder to being the top guild in Guild Wars will bring you a measure of acclaim inside the world. Belonging to a guild will also help with gaining friendship in the Guild Wars community - friends who play together stick together. 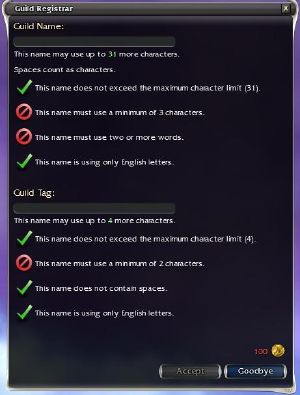 To create a guild, one must speak to a Guild Registrar who can create one for a fee of 100

. The registrar will ask you for a guild name, and a 2–4 character abbreviation that will appear next to all guild members' names. For example, a character named "Rojhaz Gravewit", in a guild whose abbreviation is "AbCd" will appear as "Rojhaz Gravewit [AbCd]." The name must include at least two words, which must be made up of at least 3 and no more than 31 characters (including spaces). Once your guild is created, you can start inviting members. 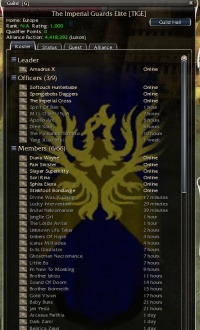 The Guild Menu screen of a guild

The Guild Roster is used to see and manage guild members and guests. There are four ranks of membership, being (from highest) Leader, Officer, Member, and Guest. Each rank carries specific privileges. In general, only the leader can make major changes to the guild, officers can make smaller changes and manage some of the guild's roster, members can only play and enjoy guild membership benefits, and guests can only participate in guild battles for limited periods of time.

The Guild Roster window shows the names of people currently in the guild, their ranks, and when they last logged in. Hovering your mouse over a guild member will also show their join date, who they were invited by, and promotion/demotion history.

Guild membership is limited to 100 people at any given time.

See the Guild Roster article for details on ranks and management options.

To start designing your cape, the leader must talk to a Guild Emblemer.
Designing a cape is free, but each time the cape is changed/created, it will cost 2

.
See Cape for further details about customizing the cape.

To purchase a guild hall, your guild must already have purchased a guild cape. A hall costs one Celestial Sigil. If your guild has a cape, you can speak to the Canthan Ambassador in Lion's Arch, Kaineng Center, Kamadan, Jewel of Istan, or the Great Temple of Balthazar to visit any guild hall. While visiting, you can purchase the hall from the ambassador or speak to him to visit a different hall or leave the hall. While visiting a hall, each has a Sigil Trader.

Any non-pre-Searing member of a guild is able to travel directly to their Guild Hall using the "guild hall" button in the Guild window (reached by pressing G).

Once you have purchased a Guild Hall you can purchase services for it and host guild battles.

If you wish to change your guild hall again, buy another Celestial Sigil, talk to the Canthan Ambassador and choose your new guild hall. All purchased NPC's for your guild hall will be transferred to the new one, so you will not have to buy them all again.

Alliances are one of the hardest parts of a guild to maintain. Without some strong guilds, an alliance will just be a chat room. As guilds are the backbone of any alliance, all participating guilds must be active in order to prevent their alliance from dying due to inactivity or non participation.

In order to start or join an alliance, a guild must first decide if it wishes to side with the Kurzicks or the Luxons, as all guilds in an alliance must be aligned with the same faction in order to obtain faction points. Also, a guild can change sides as many times as they want- if you talk to the appropriate Luxon or Kurzick ambassadors in House Zu Heltzer or Cavalon you will be given the option to change for 500

. Your guild will start off with the basic 5000 faction points. This can be done as many times as needed, but every time the faction will reset.

To invite a Guild into an Alliance, the Guild's leader must pay 1

. A strong alliance participating in Alliance Battles regularly may begin to gain enough faction to be granted an outpost or town. An Alliance may have a maximum of ten guilds in it.

Leaving or Disbanding a Guild

A member can leave his/her guild by clicking the icon next to your name on the guild roster and choosing "Leave Guild." Only the guild leader can disband a guild, and must kick out all guild members beforehand to do so.