The control system is going to be significantly changed, in particular mouse movement in the form "click to move" will be removed from the game. Guild Wars 2 will introduce a z-axis to the game which will allow characters to jump over obstacles. Actions which have characters interacting with the environment, such as sliding, climbing and swimming will also be introduced. 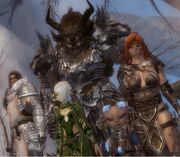 The playable races of Guild Wars 2

Each race will have access to unique traits and a racial skill.

Guild Wars 2 will have 8 professions, loosely classified by the type of armor they wear.

The Guild Wars 2 story is set about 250 years after the events in the Eye of the North expansion. As reported by PC Gamer magazine in a special issue, the world of Tyria will be drastically changed from its original form. These changes will be caused by an ancient race of powerful dragons resurfacing after millenia of slumber. The first of the dragons, called Primordus, was already debuted in Eye of the North, whose main antagonist, The Great Destroyer, was one of his generals. This dragon arises and takes over the underground network of Asuran tunnels under Tyria, driving the Asuras to the surface. Subsequently a number of other dragons resurface; one rises about the sunken holy city of Arah in the ruined kingdom of Orr, simultaneously raising the entire region from below the water level and creating an undead armada that severs the sea route between continent of Tyria and the Factions continent of Cantha; another arises to the south of the Crystal Desert, cutting off the link to the Nightfall continent of Elona; a third arises in the Far Shiverpeaks and uses its icy minions to push the Norn south into the land previously occupied by the Dwarves.

The resurfacing of Orr causes massive floods that destroy many coastal cities in Kryta, including its capital city, Lion's Arch. The Krytans move north, away from the coast, and establish a new capital, Divinity's Reach, in the former holy village of Divinity Coast; there, they set up a republic that ends the years of feuds between the Shining Blade, a faction loyal to the Krytan royalty in waiting, and the rebel White Mantle. Many refugees flock to Kryta from the rest of Tyria; most importantly, the humans from Ascalon, which now belongs entirely to the Charr. Those Ascalonians who did not flee to Kryta move southwards and barricade themselves in a fortress called Ebonhawke. Ascalon City itself becomes a ghost town, populated by the vengeful spirits of its former citizens who slay all who dare enter. A legend says that if one of the two relics of Ascalon's sundered royal line, the flaming swords of Prince Rurik and King Adelbern, are returned to Ascalon, then the spirits will finally be at rest. Lion's Arch is eventually rebuilt and becomes the new portal into the Mists with the blessing of the god of war, Balthazar; it takes the place of the Battle Isles, which also sinks in the floods.

In Cantha, the successor of Emperor Kisu defeats the warring Kurzick and Luxon factions and reunites Cantha under one banner. Under his strong leadership, Cantha forces all non-human races off their lands and fortifies its borders, becoming much more isolationist than before. The few Canthans who oppose the new empire are exiled to Kryta. When Arah resurfaces, the Corsair ships that used to take refuge in that archipelago are corrupted by the dragon to form a deadly fleet of black ships that seal off all trade routes between Cantha and the other continents. At the start of the Guild Wars 2 story, there has been no contact with mainland Canthans for a generation.

In Elona, the undead general Palawa Joko, who had briefly formed an alliance with the Order of the Sunspear to defeat the fallen god Abaddon in Nightfall, successfully reconstitutes his undead army and begins a long siege on the Elonian provinces of Vabbi, Kourna and Istan. Vabbi is all but destroyed, its former splendor ruined by a ravaging famine when the river Elon is diverted by Joko. The Sunspears are eventually broken by Joko's armies, and many of their former leaders are converted to his service, some alive, some undead. The land bridge between Elona and the Crystal Desert is blocked by Joko's minions and Kralkatorrik, and the only news that slips through is carried by the mysterious and secretive Order of Whispers, who are now spread over all of Tyria.

Besides the humans, the other sentient races have a comparatively better time. The Norns and the Charr continue to honor their peace formed from a mutual respect. The Asuras spread through all cities, maintaining a network of teleportation gates but also remaining strictly neutral. The Charr achieve total victory over Ascalon and settle into the former human capital of Rin. A new race, the Sylvari, appear fully formed from the mysterious tree that the centaur Ventari tended to until his death. The Dwarves, who pursued the Destroyers deep and long at the end of Eye of the North, are now deathless creatures of stone; the few who remain watch the ages go by, interacting little with the other sentient races, if at all.

Characters and items from the original Guild Wars campaign will not be migrated to play in Guild Wars 2. Saved names and some items and titles will be available to players of Guild Wars 2 through a Hall of Monuments created as part of Guild Wars Eye of the North.

The professions are being designed so that they are all viable for both solo and group play.

It is currently known, according to the special Guild Wars edition of PC gamer, released in October, that the Ancient Dragons will be the primary antagonist of the PvE campaign. Other minor antagonists that are known at this time are the White Mantle and Palawa Joko and his army of the undead and fallen Sunspears.

The level cap in Guild Wars 2 will be 80. The leveling curve has been designed so that at higher levels, it takes roughly the same amount of time to level up no matter what level a player is. It has also been stated that the power curve will be flattened, with diminishing returns for higher levels.[2]

There will be two types of PvP available in Guild Wars 2: World PvP and Structured PvP.

World PvP will allow you to play characters of any level using the skills that you have in your possession at that particular time. It will be on a larger scale than the original Guild Wars PvP with large battles which could take place over a long period with people coming and going. Battles will take place in the Mists.

Structured PvP is similar to the original Guild Wars style GvG. It will allow you to enter the game at maximum level with all skills, races, items and classes automatically "unlocked".