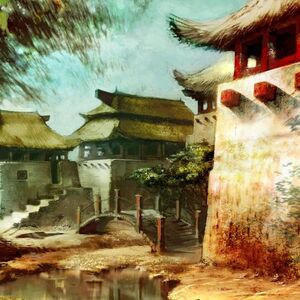 Guild Wars Factions, globally released on April 28, 2006, (exactly one year after the original Guild Wars was released) is the official product title of ArenaNet's second campaign in the Guild Wars world. It is also referred to as Chapter Two, Campaign Two, Factions Campaign, or more commonly: Factions.

The Factions Campaign takes place in Cantha, the home continent of the sailing merchant empire, with an Asian theme.

The backstory revolves around Shiro Tagachi, a former bodyguard of the righteous emperor of Cantha 200 years ago. Shiro murdered the emperor and was killed for it. As he died, he let out a wail that turned the seas into solid jade and petrified the forests. The game takes place some 200 years later, when he returns from the grave to wreak his vengeance upon the Canthans, becoming the antagonist of the story.

The plot also focuses on the warring factions of the Luxons and the Kurzicks who continuously and violently compete with each other for resources in Cantha.

The game is currently available in two editions:

The following features were released with Guild Wars Factions: