Gwen is a little girl that you first encounter in pre-Searing. Until Guild Wars, Eye of the North, no one knew what happened to her after the Searing, but little hints and clues were encountered in different areas of the game.

You can find Gwen behind the Resurrection Shrine on the east-side of the Ascalon City entrance. The first time you speak to her, she will give you the Gwen's Flute quest in which you need to find her lost flute. If you complete the quest she will want to follow you in your adventures. She is a very useful sidekick as she is never targeted by enemies and can heal you for 20 HP when your health is down. Speak to her to have her follow you and speak to her again to have her wait. If you have any of the items you can give her, she will ask for one of them instead.

If she is following you, she will be waiting for you anytime you enter an explorable area (with the exception of the Catacombs and The Northlands) but if you log out or if you enter Ascalon City she will return to her original location.

You may also give any of the following gifts to Gwen to make her more attached to you: a flute, a cape, or some flowers:

Once Gwen likes you enough, she will give you her most prized possession, a Tapestry Shred. The cheapest way to accomplish this is to give her the Broken Flute, followed by three Red Iris Flowers (total cost: 0

). You do not need to buy the more expensive items.

Gwen speaks of many things as she follows you around. All the characters she talks about are characters you meet in the game. The following are possibly all of Gwen's lines:

While Next to Ciglo (Monk Test):

While not following you:

During her appearance in the Beta Weekend Event: 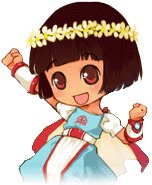