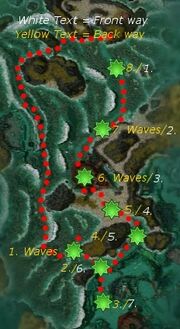 1 You can only earn the faction reward the first time you complete the mission at a certain level in either mode, you will not earn faction for completing it in the other mode.

Most enemies will go directly for your Young Turtles, so make sure to try to stop the incoming enemies before they are even in range of the turtles.

Petras will give you up to three Smoke Canisters. Siege Turtles will aim their siege fire at the location where you drop the canisters. Make sure to position the canisters slightly ahead of the enemies' path, as the siege weapons have a firing delay on the order of 10 to 15 seconds. The knockdown area of the siege attack is huge, so your enemies will spend lots of time on the ground. Bringing skills that profit from knockdown will have a big advantage. If you want to be safe, you want to put the canisters where the young turtles are (it won't hurt them).

You will often get attacked from multiple sides, so coordinating the defense will be key. Decide who will carry the smoke canisters before starting the mission.

After you reach the gates of the Leviathan Pits with the turtle caravan a cutscene will trigger. The mission doesn't end here. After the cutscene you will have to fight and defeat a group of afflicted to complete the mission.

This mission requires the smoke canisters to be moved all the time. Completing it with fewer than 3 human players can be difficult.

An alternative strategy for completing the mission is to leave the turtles in their starting position and clear the path ahead using a different route. This method takes more time but lets you pull mobs at your leisure. The map to the right does not show the optimal path, but is there for reference to the numbered points.

Run to the end of the mission until just before the Leviathan Pits area (use the map above). You will not encounter any Kurzicks until the group right in front of the gates of the Leviathan Pits. Killing Kurzick groups will often spawn more groups that run to your location. When this happens, it is vital that you get out of the way, or else you will be overwhelmed. The easiest way to pull such groups apart is often to intercept one as it runs to your location, while avoiding the rest.

Clear a group at yellow point 7 and then many Kurzicks will run to that point. Most come from the north, but a small group comes from the southwest. Head to the southwest to intercept that group. It can take a while to pull the various groups apart at point 7.

Finally, return to the caravan at point 8. Drop a smoke canister in the middle of the turtles, and then target and kill the juggernauts immediately. They come from the south and are the main threat to your caravan. Most of the Kurzicks will rush the Young Turtles and be slaughtered by the Siege Turtles. That leaves only a few Kurzick Monks to mop up.

The rest of the route will be clear except that you will be attacked by a group of four Kurzicks from the north a little before the caravan reaches point 6.

After arriving at the Pits, a cinematic will play. The mission is not yet over at this point. Small waves of afflicted will attack through one of the gates. Players may either let them close in, allowing use of the siege turtles, or fight the battle outside the gates, keeping the afflicted far from the turtles. Any Luxon or Kurzick NPCs that survived the cinematic will join in the fight as the afflicted approach them.

Master's reward is to keep all of the young turtles alive, not just one of them. This doesn't require different tactics, but merely better execution.

Choose one method of doing the mission before entering it. The back way is harder and will take more time - you are facing the same mobs, except you don't have the Siege Turtles and other NPCs backing you up. However, the back way does guarantee the Master's reward. Doing the mission the front way is considerably easier, but you risk making a mistake and losing the Master's reward.

In Hard Mode, Kurzick Monks are quite powerful healers, while Kurzick Elementalists do heavy area damage with Unsteady Ground. These are your top priority targets while clearing the back route. Kurzick Warriors and Rangers aren't that dangerous individually, but seven of them focusing fire on the same target can be a big problem.

The key here is antimelee skills, such as a Curse Necro with Enfeebling Blood, Shadow of Fear, and whatever else might harass groups of Warriors and Rangers to keep your party alive. An Earth Elementalist can provide some good countermeasures to groups of warriors and rangers, too, with area blinding, weakness, knockdown, and blocking skills. An interrupter can help with monks and elementalists, and Daeman does well at this if you're using only henchmen and heroes.

Note that Kurzick Juggernauts are never linked to other Kurzicks. Any potentially difficult group that includes Juggernauts can be made easier by pulling the Juggernauts first. Shoot something and run, and Juggernauts will chase longer than other mobs. You may have to shoot and run several times to get the Juggernauts far enough away from other Kurzicks that they come alone, but they will do so eventually. The rangers have Pin Down, so your puller may need to dodge some while running, or have another character who can clear conditions nearby while pulling.

When the Juggernauts reach the caravan, flag your party on the smoke canister at the center of the young turtles. Because NPC allies are much stronger in hard mode, the warriors that come flooding in will mostly target your party and leave the young turtles alone. Your main priority is thus merely staying alive, and your damage output doesn't matter. While four Kurzick Monks come to heal the warriors, one round of Siege Turtle fire will kill most Warriors attacking you even over the Monks' healing. Don't chase the Monks, but just stay in the center in whatever wards you have for defense. Once all of the Warriors are dead, finish of the monks.

Inside the Mission[edit | edit source]

Petras: Do you see those engines of war mounted on the turtles down there? They can do a lot of damage, especially if they all fire on the same target. We use smoke canisters to indicate targets for the siege turtles to attack. Just drop one on the ground and get out of the way. The canister will emit smoke, and the turtle will fire on that location. I've only got three of them, so be sure to reuse the ones you take and don't leave them behind. Just take them from me as you need them.

Argo: Turtle Clan, protect the young ones! The Kurzicks are coming in large numbers! Form a ring around the young ones! No Kurzick shall touch these hatchlings, I swear upon our ancestors!Target their juggernauts! They're designed to take our even our largest turtles!

Argo: Our very way of life has become entwined with the lives of these turtles, and it is up to us to ensure their survival, and ours. I have no doubt that the Kurzicks will make every attempt to stop us from taking these young turtles to safety. Be prepared for their attacks to come at any time, from any direction.

Argo: Kurzicks! Lots of them! Closing in fast....

Argo: Look sharp, the enemy has sighted us! Here they come!

Argo: Kurzick scum! I grow weary of their relentless assaults. Surely they must realize they cannot win. Turtle Clan, move out!

Argo: To arms! To arms! Kurzicks approaching! Keep those siege weapons firing! Don't give up and inch of ground! Stand firm, Luxons!

Argo: Today we defeat these invaders in our own lands. Tomorrow we sweep across their lands like the tide and crush them! Turtle Clan, move out!

Petras: The Kurzicks are trapped.

Petras: We've got to go save them.

Luxon Soldier: Are you crazy? They are the enemy. Let them die.

Petras: If we don't help them, they'll be turned into Afflicted, and we'll have twice the problem. Out of my way.

Petras: Over here, quickly. Your options are limited. If you want to live to see another moon, then I suggest you get behind me. I won't ask you again.

Luxon Soldier: I say we skin them and use their hides for sails.

Kurzick Soldier: You scum. You will pay for this.

Luxon Soldier: Those are some pretty big words from someone who's about to learn the true meaning of pain.

Master Togo: You must stop your squablling. This feud has gone on long enough.

Luxon Soldier: So why should we stop it now?

<party leader>: Because now you have a common enemy.

Master Togo: Do you not see? Shiro the Betrayer has returned.

Luxon Soldier: Shiro is dead. Even the Kurzicks will tell you that.

<party leader>: How do you account for the Afflicted then? Where Shiro goes, the Afflicted are never far behind. He's the source. And if we're fighting these monstrosities, then he's sure to be near.

Kurzick Soldier: As much as it pains me to admit, Togo is right. There is no other explanation. Shiro has returned.

Luxon Soldier: And what would you have us do, Master Togo?

Master Togo: I would have you stop bickering like school children and start forming an alliance. Only together will we have the strength to defeat him.

Luxon Soldier: Forgive me, Master Togo. You have never steered us wrong before. We will do whatever it takes to destroy Shiro once and for all...

Luxon Soldier: ...even if that means allying with the Kurzicks.

Master Togo: Then let us find Brother Mhenlo. I hope he has made as much progress with the Kurzicks as we have here today.

Kurzick Soldier: Brother Mhenlo...he was with Baron Vasburg. They were on their way to the Harvest Temple.

Master Togo: Then we too must head to the Harvest Temple. Thank you.