From GuildWiki
(Redirected from Halls of Chokhin)
Jump to: navigation, search

The Holdings of Chokhin are an explorable area in Vabbi and are the domain of Prince Mehtu the Wise. His library-palace, the Halls of Chokhin, is located in the northeast. The rest of the Holdings consists mainly of narrow, rocky gorges connecting a few small open areas. The northwestern flatlands are on the edge of a lake that appears to be the source of the Elon, meaning that this area may be of great strategic importance in the future. 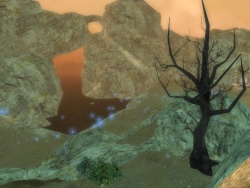 The NPCs found in the Halls of Chokhin are mostly named after people who have contributed to the lore of Guild Wars. Specifically, the Lore Forum of GWO, a popular Guild Wars elite fansite. Each corresponding NPC parodies the personalities and works or research of the person he or she is named in honor of.

For instance, Master Librarian Antohneoss is likely named after the Loremaster of GWO Quintus Antonius, and talks about running the library in a style similar to Quintus's moderation. Other NPCs include: