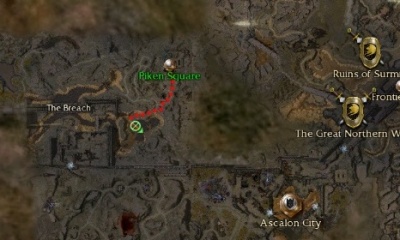 The Siege of Piken Square

"My troops are moving to sweep in behind the Charr warband led by Grimm Sharpfang. If all goes according to the battle plan the Charr will be driven up toward the tar pits. I need a group of stalwart fighters to sweep down from the north and help my troops pin them against the tar pits. When you have them trapped, I want you to crush them as between a hammer and an anvil."

"My troops couldn't have destroyed Grimm Sharpfang and his warband without you. Once again you've made the Vanguard proud."

Leave Piken Square and head south towards the tar pits. Once you reach them and attack Grimm Sharpfang members of the Ascalon Militia will join in the attack. Once Sharpfang is dead, return to Duke Barradin to finish the quest. This quest can be completed with henchmen and a character of the same level. The Charr mobs are easily pulled.