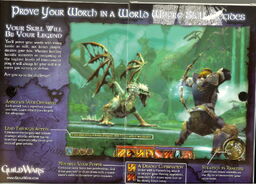 Hamstorm refers to a W/E build consisting of the sword skill Hamstring and the fire skills Meteor Shower/Fire Storm. The build itself was a community joke stemming from the inside-flap of the Guild Wars box. On the inside it combined the skills Hamstring and Fire Storm claiming superior strategy with the combination of the two skills. As most people playing Guild Wars will note, the skill combination is decidedly horrible, however the ArenaNet boxmakers understood otherwise.

Another reason the "Hamstorm Warrior" draws so much ridicule is because of the other skills on the bar of the Warrior on the Prophecies box. The skills included spells from 3 different elements, 2 melee attacks, a shout, and a stance. The warrior (whose bar includes 2 sword attacks) also appears to only have a Bow, a hammer, an axe and shield, and a purple air wand equipped in his weapon sets making the sword attacks useless. Also, the character's sword attacks are not disabled, even though it's using a bow. The warrior only has 212 health and (miraculously) 25 energy with 3 pips of energy regeneration, showing that he is a ranger with skills from two other professions.

In Guild Wars: Eye of the North, players can participate in The Norn Fighting Tournament. One of the opponents you'll face is the Prophecies henchman Little Thom, who fights using a Hamstorm build.