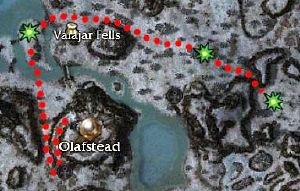 Magni the Bison in Gunnar's Hold

Xandra is required in the party

"Is that Xandra with you? I've been meaning to have a word with her. Spirits have become restless as of late, attacking the people. These are not the animal spirits that the Norn know, but something... different. Human spirits, filled with rage.

The worst attacks occurred in Varajar Fells, and I simply have no time to run around hunting ghosts. I have a tournament to run!"

Accept: "You might say I could use some... exorcise."
Reject: "I bust heads, not ghosts."
When asked about quest: "Death lasts forever. My patience does not. Rid Varajar Fells of malicious spirits!"

Xandra: "Never have I seen a spirit with such malice. Stories speak of Ritualists so powerful that spirits are drawn to them, but this seems different. It seems to have an interest in me, specifically..."

Tanto the Grim: "Let me feel your sorrow. Let me strip you away until there is only pain, and emptiness. Endless pain... so sweet..."
Xandra: "What call is there for this? Why do you seek to harm innocents? Answer me, spirit!"
Tanto the Grim: "I wish only to kill you, child! I served Kivros, your grandfather. After his death, your mother Juno took everything from me. Everything except this pain that will not end, and an escape that will not come."
Tanto the Grim: "I would see her deprived of everything she held dear before she too joins me in this endless misery!"
Xandra: "My mother...? What do you know of my mother?"

Xandra: "Spirit! It is time that your bonds to this world were severed!"
Tanto the Grim: "Tainted blood runs thick, witch! You are doomed to share your ghastly mother's fate! You shall slay her as she killed Kivros!"
Xandra: "You may have been wronged, but we are more in life than the sum of our mistakes! Regrets belong to the living. Let me bear them. Ease your burden and move on."
Xandra: "It is not too late for you to change your path. There can be peace for you in the afterlife if you abandon your malice!"
Tanto the Grim: "Peace... peace...."
Xandra: "Yes! Peace for all of you. It is possible."
Tanto the Grim: "For what you did... there can be no peace. Only SUFFERING!"

Xandra: "Is this why Mother sent me away? To protect me from the vengeance of her enemies? Or to protect her from suffering the prophesies [sic] of the dead?"
Xandra: "Though Ritualists spend lifetimes communicating with spirits and the past, I understand now. I can not let that shape what is to come."
Xandra: "No matter that I am exiled. I dwell no more in the past. Looking to the future, I swear I will honor my family and my clan!"

"Thank you for aiding Xandra. It is a shame that I did not get to vanquish the spirits myself. These "Ritualists" are like the Norn in some ways, in their connection to the spirits. I hope this fight has strengthened your nerves for combat in my arena!"

Start from Olafstead, then just follow the quest markers and kill all spirits that rise there. Avoid aggroing too many other foes at a time.