Heart or Mind: Ronjok in Danger 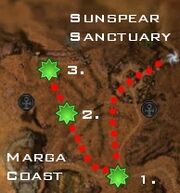 Zerai the Learner in The Kodash Bazaar

"These dark times bring with them dark dreams. In old tomes at the library it said that Abaddon will strike through the minds of his enemies. The more passionate the soul, the easier the target. If Melonni's dreams are real, then her village is indeed in danger. The only way to know for certain is the travel to the Marga Coast. Perhaps Elder Jonah can shine some light on these dark dreams. You must make the choice. Go to Ronjok in Kourna or help us Vabbians with the Garden of Seborhin."

Accept: "We must investigate these nightmares of Ronjok."
Reject: "The Vabbi need is much too dire to ignore."
When asked about quest: "Head south to the Marga Coast. You will find Elder Jonah there."

"Has the village not suffered enough, Melonni? What nightmares are these that would bring this land into Abaddon's realm of torment? I wish I could say you are on your own, that you are crazy. But there are others who have suffered from these same terrors. And with them come dark, unnatural things that can affect the waking world. Dreamer Hahla was sent away for fear of what she would awaken. You must do the same, Melonni. You must leave... for the sake of us all."

Melonni: "Before we leave, let us take a look around. My dreams are too real to just dismiss them so easily."

Melonni: "In my dreams these fields were torn apart, sundered I swear I saw them!"

Melonni: "Teeth! There were sharp teeth, like the land was eating itself... why hasn't it happened? I saw myself. The nightmares were so real."

Melonni: "There... look at her. She suffers as one tormented in the mind! Let us see what is happening!"
Dreamer Hahla: "Ahhh... Torment! Demons! Save me!"

"These nightmares drove me from my village, and others are far worse off than I. With the dreams come dark things, just as the elder said. Chuno did all he could to hold them off, but the dreams kept getting worse. I fear this whole area will soon become irreparably weakened against the Realm of Torment. You must take Melonni and speak with Dreamer Raja. She may start Melonni down the path to salvation."

Player response: "Are you alright?"

"Yes, but you must return to Ronjok and see Elder Jonah."

Elder Jonah: "Ahai, Melonni. Why have you and your friends returned?"
Melonni: "It looks so . . . normal."
<party leader>: "We heard that there was trouble here."
Elder Jonah: "There is trouble everywhere. Here no more than elsewhere."
Melonni: "This is wrong. Something is going to happen. I know it in my heart."
Elder Jonah: "Perhaps if you got Melonni to your sanctuary. The waters there may help her."
<party leader>: "Come on Melonni. It's going to be all right [sic]"

"You will need this. There is only one way to end Melonni's torment. She must confront her nightmare head on and slay the Harbingers residing in her soul. If she does not, they will, through her, become real. Kormir has spoken to me of the thinning barrier between this world and the Realm of Torment. The threat of a direct attack on this world by Abaddon draws near."

This quest involves running to certain points in Marga Coast, starting not too far from Ronjok Village. Bringing a running skill or a Warrior Henchmen will make this quest easier. After following the quest markers, you will meet Dreamer Hahla, at which point Hahla's nightmares will spawn nearby. After they are defeated, speak with Hahla again, and your party will be moved to Nundu Bay.