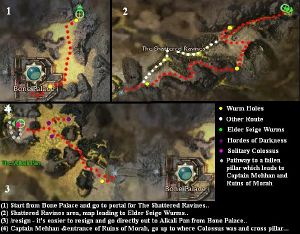 A Deal's a Deal

"To finish this business, you will need firepower like you have never wielded before. The force you just defeated is nothing compared to what now rises in the Alkali Pan. To reach Varesh, you must face the Horde of Darkness... the very Margonites who fought the gods when Abaddon stormed the gates of heaven. Do not despair. The great wurms wield great power. Travel north to the Shattered Ravines where you will find elder siege wurms. Kill them and allow your great wurms to devour their carcasses, imbuing them the carnal knowledge of how to use siege attacks. This is your only chance against the Horde. If you fail, the Horde of Darkness will spill forth across the world like an eternal shadow, and forever the eternal darkness shall reign. You living folk might want to see to that."

Accept: "Yes. Yes, we really should see to that. Good idea."
Reject: "God-battling demons and fire-spitting wurms, huh? Maybe later. First, I think I should go have a nice lie-down."
When asked about quest: "Before you battle the Horde of Darkness in the Alkali Pan, you must first travel north to the Shattered Ravines and teach your wurms how to shoot long range siege attacks. Fill their bellies with elder siege wurms and they will learn this awesome power."

"You are the ones Morgahn has sided with? It is good to see such bright heroes in a time of total darkness. Ah, I see you can tell I have been touched by Varesh's dark god, Abaddon. Yes. It is true. I was left behind when Varesh sent her forces into Vabbi to hunt the Sunspears. As more and more of her army received the dark god's "blessing," some were driven mad while others committed suicide rather than suffer the madness. I had to stay strong even as I descended into darkness. I knew Morgahn would need good men if he were to ever return. So, I remained with Varesh as she crossed the Desolation and seized the Bone Palace. Varesh then pushed on toward the Mouth of Torment, where she now performs her dark ceremony even as we speak. As the ceremony swelled, the strongest creatures I've ever encountered rallied for battle. That was the Horde of Darkness you just decimated. Abaddon only knows what you will face next. I was left in charge of Varesh's final line of defense but, as you can see, I am at Morgahn's service, not hers. What would you have of me?"

Player response: "We must reach the Mouth of Torment."

"Of course. I am here to serve Morgahn. I've seen what Varesh's dark god plans for this world; it is not what I would want for my children... or anyone else. Even though I've been "blessed," that doesn't mean I cannot fight this battle to the end. Let me know when you are ready."

"Please take this with my thanks. You see, Morgahn and I were close friends, even though his father was a high-ranking noble and mine just a simple guard captain. We both worship Lyssa and grew up viewing the world in much the same way. He and I have seen more than our share of dire situations and have saved each other's lives more times than either of us care to remember. I would follow him into the depths of the realm of Torment if he so commanded. It is a shame Varesh and Bayel could not inspire that loyalty."

Once there, head towards the northeastern corner, towards the only green patch of ground in the whole of the Desolation. There you will find several Elder Siege Wurms. Despite what the quest summary says, you do not actually devour them, you merely need to kill them to trigger the quest update. Once the quest triggers, your Junundu wurms (in any area) will have access to the skill Junundu Siege.

Map travel back to Bone Palace. Then head to Alkali Pan and call the wurms again. Simply follow the quest markers to take out the three groups of Horde of Darkness.(Note: You can only kill them by using Junundu Siege) Be wary of Desert Wurms (usually in pairs) and the other mobs as you hunt them. To complete Step 3, simply approach the so-called Colossus and activate Junundu Siege. The Colossus will come within range when you approach along the sulfurous sands. The Colossus will collapse after one hit.

Go around the small hill and onto the rocky area and cross the now fallen Colossus and talk to Captain Mehhan. He will teleport the party into the Ruins of Morah for quest completion.