From GuildWiki
(Redirected from Humans)
Jump to: navigation, search

One of the most widespread and influential species in the world of Tyria. They are the dominant species on the continents of Tyria, Cantha, and Elona. The origin of humanity is unknown. The earliest mention of humanity is their settlement of the northern coastline of Cantha in 786 BE, however it is not clear if they arrived from elsewhere or originated in Cantha but did not have permanent settlements prior to that date. 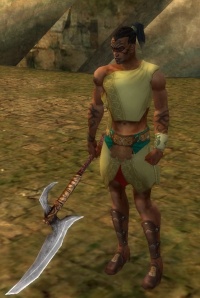 A typical human to be found in Kryta

Humans first appeared on the Tyrian continent nearly 1300 years ago (the year 205 BE in the Mouvelian Calendar). Prior to their arrival, Tyria had been in balance under the control of a powerful serpent race. Humans quickly rose to prominence and the serpent race withdrew into the Crystal Desert and is now only known as the Forgotten.

Humans formed three powerful kingdoms: Ascalon (founded 100 BE), Orr (founded 2 AE) and Kryta (founded 300 AE). Unfortunately, their history has always been marred by conflict and struggle for dominance. Most recently, this was manifest by the Guild Wars which lasted for over 50 years and ended only due to the terrible threat of the Charr invasion.

The three kingdoms (Ascalon, Orr and Kryta) are merely three broad groupings of humans. Within each kingdom and across kingdoms, humans can be found aligned to certain factions, as follows:

The people of Kryta are ruled by the White Mantle, who have replaced the old Krytan royal family.

The Lionguard were the elite guard of the deposed Krytan royal family. They have now been relegated to constables of the peace by The White Mantle.

A small group of Krytan rebels, known as the Shining Blade, seek to bring down the White Mantle.

Under direct control of King Adelbern, the Ascalon Army is charged with defending the remaining Ascalon settlements and citizens.

Led by Prince Rurik, The Ascalon Vanguard agressively pushes into Charr-held territory in an attempt to free Ascalon from the invaders.

Led by Captain Langmar, The Ebon Vanguard is a group of survivors from Ascalon that fled their way north into the Charr Homelands after the searing. 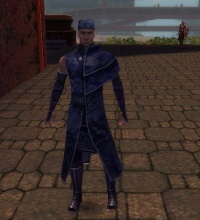 A typical human to be found in Cantha.

Human settlement on the Canthan continent began around 1700 years ago. While it is said that their development were unhindered by the Forgotten, it is unclear if the two races were ever in contact.

The Celestial Ministry is the main bureaucratic organization in the Canthan government. The ministry has grown corrupt and inefficient, and the emperor is apparently unable to reform the bureaucracy.

The Crimson Skull, Am Fah and Jade Brotherhood are Canthan guilds involved in criminal activities.

The Xunlai, involved in Storage and tournament sponsorship, is presumed to originate in Cantha.

Luxons are one of two rival factions on the Canthan Continent. They are at perpetual war with the Kurzicks, and are not part of the empire led by the emperor, since they broke away from it. They live in the Jade Sea territory as well as the mountains and hills.

Kurzicks are the enemies of the Luxons. Like the Luxons, they separated from the empire and are their own sovereign entity. Much of their territory is located in the Echovald Forest. 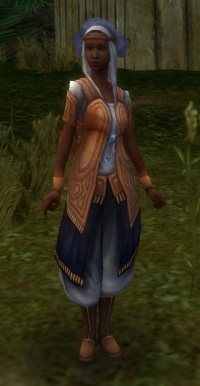 A typical human to be found in Istan.
This section of the article is a stub. You can help by adding to it.

In 200 BE The first Primeval King establishes rule in Elona from Fahranur.

The Order of the Sunspears[edit | edit source]

Currently led by Spearmarshal Kormir, the Sunspears are an elite order dedicated to protecting the entire nation of Elona. Although their headquarters reside in Istan, they do not belong to any one province, and expect the freedom to travel wherever in Elona their protection is required.

Led by direct descendants of Warmarshal Turai Ossa, the Kournan military is the might of Kourna.

The wealthy and cultured province of Vabbi is ruled by three merchant princes.

Due to the ridiculously inhospitable nature of this region, humans do not reside here. Various forms of undead can be found here, however, and it is possible for the living to cross the Desolation with the aid of giant wurms. This was not always the case; the Desolation includes the ruins of human settlements such as Morah and Sahlahja.

Rebellious, sea-faring pirates, corsairs are often encountered in Istan and on the coasts of Kourna.

The following creatures used to be human, or are descended from humans.