From GuildWiki
(Redirected from IDS)
Jump to: navigation, search

The Icy Dragon Sword (commonly abbreviated to "IDS"), like the Fiery Dragon Sword, is a popular sword that is prized for its style. It has a unique look, with its frosty blade (only two twisted "filaments" as a solid core) coming out of the dragon's mouth that acts as the hilt. It only appears with a gold rarity.

"Yakkington had to win a tug of war battle with an Ice Imp for this little treasure!" -Nicholas

The Icy Dragon Sword only drops as loot from Ice Imps in the ice caves in the eastern part of Mineral Springs (see thumbnail). If any party member has the quest Defend Droknar's Forge active in their Quest Log, the Ice Imps will not spawn. 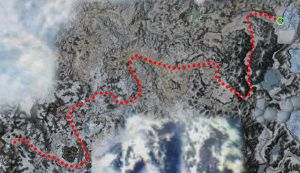 Optimal route to the ice caves in Mineral Springs, starting at Granite Citadel.

Dye only affects the sword's hilt- it does not change the color of the flame. For a sword with a different color flame, consider the Fiery Dragon Sword. If you don't want an elemental mod, think about the Vampiric Dragon Sword. The Icy Dragon Sword obtained from the Traveler cannot be dyed.

File:IDS anim.gif
In game footage of the Icy Dragon Sword