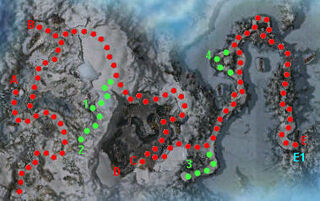 This is the first mission in which your character will encounter Spectral Agony, a monster skill wielded by Mursaat and their Jade automatons. This absurdly powerful skill can drain 600 health within five seconds; consequently, treat these enemies with grave caution. The best defense against Spectral Agony is infused armor, which reduces degeneration to 15 health/second. Unfortunately, the next mission is the first opportunity to infuse player or henchmen armor. For this mission, you can take Pets and Heroes (whose armor is innately infused). You can also summon Minions or Spirits to divert the enemy. (You can find additional tips below.)

It is not necessary to kill any Mursaat to complete the mission. While there are a number of groups of them, you can take alternate routes to avoid them, or else wait for them to get out of your way.

To start the mission, sneak around the Mursaat and head left. You will come across an area being pounded by siege weapons and several groups of Stone Summit. Kill them and pass the siege area. You will see a bridge and a way down onto an icy path (where the Stone Summit have set up their siege weapons). Go onto the ice and destroy the group protecting the first siege weapon and then the second. Fire the second weapon (point A) and you will see a cutscene where a herd of Yaks rampages through the White Mantle encampment and helps destroy the siege weapons and forces for you.

Now, go back up and cross the bridge into the White Mantle camp. Immediately up the hill will be a gate guarded by Jade Armors. Avoid them. If you continue to the left of that gate, you will find a path around to another door guarded by the less imposing White Mantle. Kill the patrols, grab a keg from the nearby powder station (point B) and blow the door away.

You will enter an ice cave. If you keep to the left side of the cave, you will be able to go around all the Mursaat groups (facing a few White Mantle groups) and out into an area that has a circular path with a pit in the middle. Evennia and Saidra are opposite to you on this circle (point C). You can go either left or right around the pit, but there is one patrol of Mursaat to avoid, which is easier if you go left. Then there is a patrol of White Mantle Savants and Sycophants, which you can take out. There you will find a cave that will take you around the left side of the circle to very near the cell. There is another patrol of Mursaat to dodge here. Get a keg from the nearby powder station (point D) and blow the cell door.

A cutscene will show you that Saidra sacrificed herself for you. Now you will need to blow a gate, then run Evennia to the ship. Alternatively, you can destroy the other gate before triggering the cut scene, to avoid the danger to Evennia. Despite her assertion that you should stop for nothing, Evennia will stop and engage any enemy that crosses her path. If you wish to run, keep an eye on her; if she attacks a group of enemies, you will have to attack too because otherwise she will die and you will fail the mission.

You can either run ahead of the gang of twelve Mursaat Elementalists that slowly follows and clear the way to the exit yourself, or else get onto the their path to start their movement, then run back west to get out of the way. If you do the latter and then follow the Mursaat, they will mostly clear the path for you, and then get themselves killed by catapults.

Be warned that occasionally the twelve Mursaat do not all get killed by catapults. If they do not, they will stop on the path shortly beyond the target of the second catapult. If only a couple survive, your group can probably finish them off, even if not infused.

When you're near the ship (point E) there will be some Stone Summit (with a boss) engaging the dwarves that run the ship. They usually wipe out the crew if you move too slowly, so as soon as you can, engage and destroy them.

The bonus is to rescue an imprisoned dwarf. There are two parts to this:

Now you can actually go about doing this bonus in either order:

In order to reach Rornak, you will have to clear a group of three Jade Armors and a group of three Mursaat Elementalists. If you have no defensive measures against their Spectral Agony beyond those that henchmen bring, you can probably clear them by the naive approach of charging in and attacking, but expect to take a few deaths in each battle. Your death toll can be reduced from this by means detailed in the section on Spectral Agony above. You may wish to leave the eastward facing Stone Summit Engineer to the south of point A alone earlier in the mission, so that you can recharge the Resurrection Signets that will be expended in fighting Mursaat.

Warning: It's possible the White Mantle Zealots who patrol near Rornak's cell get too close to him. He will sometimes leave the cell (even though the door is closed) and start firing his bow at the enemies. This allows them to possibly kill him, thereby failing the bonus. Try to take out the Mantle close to the locked door to avoid this bug.

Once you get past the branch off to go do the bonus, avoid fighting the White Mantle Savants and Sycophants. The groups along the normal route wander clockwise in circles, and will get out of your way if you wait for them. Two groups with identical routes usually patrol on top of each other by the powder keg station, and fighting both at once can be very dangerous.

Rornak Stonesledge: I've managed to get myself captured again. I was looking for a secret passage, a way to sneak up on these demons, but it didn't work. Hamdor Grandaxe should be leading a party to rescue me. Let him know where I am, and he'll take care of the rest.

Hamdor Grandaxe: Thank the Great Dwarf you've found him! As soon as things calm down, we'll sneak in and get him out.

Saidra: We're caught. Take Evennia to the east. The Deldrimor Dwarves use the frozen lakes and rivers there for transport. If you're lucky you'll find one of their ice ships. I'll hold off the Mursaat as long as I can. Take my bow. I won't be needing it where I'm going. To the end of us all!

Evennia: Hurry! They are right behind us. Don't stop whatever you do!

Evennia: I can't believe Saidra is gone. If the old gods still exist, then hear me now. Saidra should not have died. It wasn't her time. But she gave her life so that the rest of us could live on. Now I put you on warning, you gods who abandoned Tyria so long ago. When my time comes, and I arrive in the Mists, I'd best not find that she's been mistreated. Or as Balthazar as my witness (sic), I will make all of you pay. To the end of us all. Now we settle our account with the Mursaat. For every drop of our blood they have spilled, we will take two from them.