The Ice Floe is a desolate place linking Thunderhead Keep and Marhan's Grotto to the rest of the world through the Frozen Forest. Mursaat roam the northern regions, making travel difficult for those arriving from the Forest. Meanwhile, Ice Imps control most of the southern regions in large numbers, hindering traffic from Thunderhead to the Grotto. Most travelers arrive at Thunderhead from the ship towards the end of the Iron Mines of Moladune, allowing them to avoid this area if they wish. However, the only way to reach the small Deldrimor outpost of Marhan's Grotto is by wading through the hordes of ice imps and Mursaat. 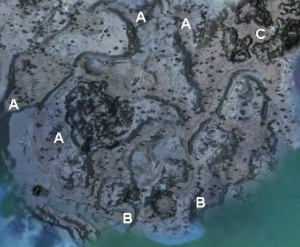 The letter A refers to the Unnamed Boss locations on the map. There are only 4 locations for 6 bosses, so not every boss will appear every time.

The letter B refers to the Imp boss locations on the map.

The letter C refers to the location of the Nightmare boss on the map. 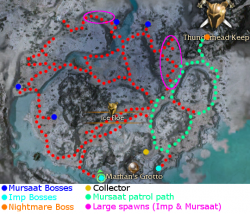