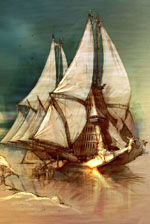 Ice ships are the vessels in which the Dwarves cruise the frozen lakes, rivers and bays of the Shiverpeak Mountains. Since the waters in that region are perennially frozen, the ice ships are a convenient method of transportation. When there is no sufficient wind to sail, Dolyaks are used to drag the ships. Ice ships come in various sizes. Some impressive ships can be seen in Droknar's Forge, Port Sledge and off the south-west coast of Ice Floe.

In chapter 4 of the stories of the Heroes of Ascalon, they encounter an ice ship:

"A pair of heavily armored and harnessed yaks came right toward the humans. Behind them, attached to the harnesses by four thick chains was what could only be described as a snow ship. The vessel had a thick wooden mainmast and three billowing sails, not unlike the ships Devona had seen off the Tarnished Coast. But where the sea-going vessels had a deep V-shaped hull, this one was flat on the bottom for traveling over the snow and ice."