He only gives up to 5 Gifts of the Huntsman per account each day. Last update: Sunday, 04:56 (UTC) 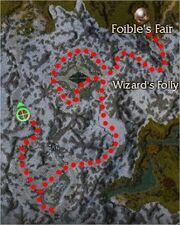 Wizard's Folly (Presearing)
Probably the easiest method is to farm pre-Searing and mule the ice into Old Ascalon.

Traveler's Vale
Just outside of Yak's Bend are groups of Stone Summit, along with plenty of Ice Golems: head west, then north. Save the Stone Summit Badges since Nick also collects them.

Lornar's Pass
From Beacon's Perch, head east out of the outpost then south.

Grenth's Footprint
Exit Deldrimor War Camp, get behind the Resurrection Shrine, and push to the tip of the rock. Kill the Siege Golems below; if the drops are poor, rezone right away (otherwise, grab your loot and rezone). Expect about 15 visits to collect 10 stones. Save your Stone Summit Badges.

Talus Chute
Just outside of Ice Caves of Sorrow.