In the Army (Luxon) 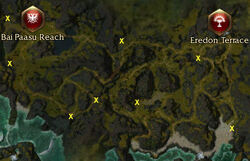 "Of late, the number of new recruits has declined. With tensions between us and the Kurzicks heating up, we can't afford a drop in our numbers. I've always considered my job an important one, but now, the pressure is on like never before, and I could really use some help. What do you say? Will you head into the foothills and round up 4 recruits for me? If you have any luck, be sure to bring them back here so I can begin their training."

Luxon Ranger Recruit
"The Kurzicks hope to take gain [sic] control of our lands and take our precious jade, but we can't let that happen! I will do my duty."

Luxon Monk Recruit
"My mother was killed during a Kurzick raid.... I think she would be proud to know that I am helping to keep other families safe. Yes, I shall enlist immediately!"

Luxon Necromancer Recruit
"Hmm.... I bet I could find a lot more corpses on the battlefront then I would around here.... Yes, it's brilliant! Why did I not think of this before? I'll enlist."

Luxon Mesmer Recruit
"I consider it an honor to fight for my people against the Kurzicks. Where do I sign up?"

Luxon Elementalist Recruit
"I have been considering joining the army for some time. It will feel good to give something back to my people."

Luxon Assassin Recruit
"Okay, fine, I will join! Maybe now my father will stop nagging me to get a job."

Luxon Ritualist Recruit
"If the Luxon army needs recruits, then I shall join. I am not one to shirk my duty."

"Good work, <name>! Some might have seen this as a trivial task, but with those foul Kurzicks attacking with more and more frequency, it's important that we keep our army's numbers up."

The recruits are scattered around the area so you'll have to search for them. The map shows the location of 8 recruits but you only need 4.

Once you talk to them they will join your party list as allies and will follow you. They do seem to try to keep out of harms way. Make sure you don't lose them from sight since they tend to stop entirely once you get too far away and you'll have to go back for them.