In the Army Now (Kurzick) 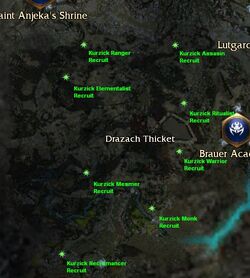 "You have come to help me find new recruits, yah? Good. I can use all the help I can get. Recent attacks from the Luxons have spurred our youth into action, and they are signing up for the army faster than I can fill out the paperwork. I'm not complaining, but if you could go out into the foothills and help bring some of those eager recruits here, it would be a big help, yah."

Intermediate Dialogue (when you deliver a recruit)

"I am honored to serve my time with the Kurzick army."

"Good work, <name>! I'll get these new recruits signed up and send them into training. It's a good thing you've done for the Kurzicks, today."

The main goal is to bring four recruits back to Recruiter Sigmund but it is not necessary to bring them all at once. There are eight in total available, but players may not recruit more than four at one time. If one that has already been recruited dies, a replacement recruit may be drawn from the pool of those remaining.

The recruits are scattered across the map. There is no map indicator for them, so one must wander around until they are happened upon. They are in the same locations every time. When recruited, they may cause Luxon forces to appear, mostly in small groups of 2.

This is a useful quest to start if you plan to do other quests in this area, as the recruits are hardy and add extra firepower to the team. The recruits follow faithfully but slowly, thus they have a tendency to come late to battles or get stuck on corners. If one or two is lost it is always possible to recruit more and still complete the quest.

The quest must be completed before leaving the zone to receive the reward. The quest is repeatable, should the party unintentionally leave.