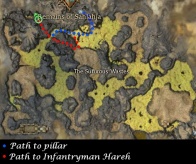 Paths to pillar and Hareh

Infantryman Hareh is an undead soldier found in the Sulfurous Wastes. He does not like his current position as a low-ranked grunt and aspires to become a commander. He offers two quests to help him acquire the knowledge and power to raise an army of undead followers.

Note: The rocky area Hareh is on is separated from the rest of the explorable area by a gap. There is a pillar on the southwest cliff that you can knock down using Junundu Smash (skill #2 while in a Junundu) to bridge the gap. This is most easily done by luring some of the Awakened from southeast of the pillar to the base of the cliff, building adrenaline, and then smashing them. The pillar itself can not be targeted. On the map, the way to the pillar is indicated with blue and the way to Infantryman Hareh with red. There is also a group of Margonites near the pillar that can be pulled from below the pillar, which can be used to build up Junundu Smash.
Alternatively, as a Necromancer, use either Consume Corpse or Necrotic Traversal to get to the other side.

"No respect, I tell you. No respect! It's always "Kill this, Hareh" or "Hareh, can you slay that for me?" One day I will call the shots, mark my words!"