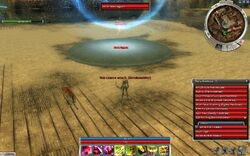 Invulnerability is a passive skill used by various creatures throughout Guild Wars. Creatures affected by Invulnerability cannot be attacked, cannot be the target of skills, do not take damage, and do not suffer from degeneration.