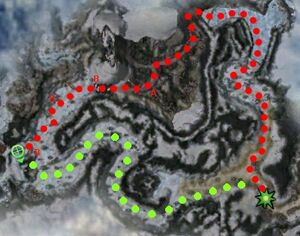 "Something troubles me about those plans. Whoever made them the first time, can probably make them again. I mean, they figured it out once already, right? If we want to stop them from making the blasted thing, we need to take away their means of production. I saw a group of engineers pulling a cart full of explosive barrels through here earlier heading towards the middle of the mines. Ye should be able to jump them and use those explosives to sabotage the levers."

"Whoa! I haven't seen explosions like that since Rornak dropped his pipe into a shipment of Dragon Stone! We'd better let things calm down a bit. They're sending in reinforcements as we speak."

Upon entering the Iron Horse Mine, you will be faced with a fork in the road:

The Dwarven Powder Keg Station is located on the map at point A. The lever sets can be found around some sort of cable car towers at the points marked B. When placing the Powder Kegs make sure to put them down in the middle between the three levers to blow all three up with one blast. While the supply of kegs is unlimited this limits the amount of running back and forth that is necessary. Checking the quest log after each blast will tell you whether you have gotten all three. Alternatively, check the chat window; each lever destroyed will deliver a single Quest Updated: Iron Horse War Machine line.

Tip1: If you have the quest The Wayward Monk active, you can use Cynn as an extra damage dealer.