The Isle of Meditation is a Guild Hall introduced in Guild Wars Factions.

The Isle of Meditation guild hall is based on the looks of Shing Jea Monastery and the rest of that island. It has small villages, rivers and beaches. Its prominent feature is a beautiful waterfall.

This Guild Hall is very large and has two layers. There are lots of winding paths along walls and over bridges and there is also a ground level where you can run through rivers and go on beaches. It is very complex. 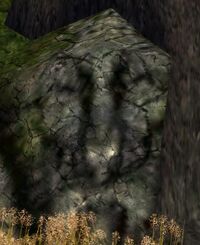 The face in the rock.

Both teams start with several NPCs.

The extra damage from the statues is quite considerable when the battle around the stand is drawn out over a long duration. This map favors the balanced team with its ability to turtle or split and react to changing conditions on the battlefield

Quite often, the battle is restricted to the lower path as both teams fight for morale boosts. Some battles get rather intense and complex as guilds try to fight for morale boosts as well as the control over the obelisk. It's not unheard for multiple people flagging even when they normally are not the flag runner.

Isle of Meditation has two different flag stands to capture. The Tower Flag Stand on the lower path controls the morale boosts. The Obelisk Flag Stand on the upper path, when captured, causes the statues lining the lower path to shoot fireballs at the other team. While the damage seems negligible at first, it adds a lot of pressure over time. Some teams position Rangers or casters at the top stand to prevent captures because they can still affect the action below. The path to the upper stand, however, hosts miasma, which causes temporary but un-removable Health degeneration that spreads like Disease.