Isle of the Nameless

The Isle of the Nameless is an explorable area on The Battle Isles. It serves as a tutorial and training area. Several NPCs ("Masters") of the Zaishen Order provide information about Guild Wars concepts and game mechanics.

The Isle also features a number of hostile level 20 members of the Zaishen Order, suitable for practicing against.

The Isle and the Menagerie are the only explorable areas a PvP character may visit.

How to get there[edit | edit source]

From the Great Temple of Balthazar, take the northern portal.

To reach the Great Temple for the first time,

Zaishen Chest right near The Guide, just up the stairs under the small roofed structure, or right behind where first-time PvP characters spawn. Use (default) ALT-button to see it. 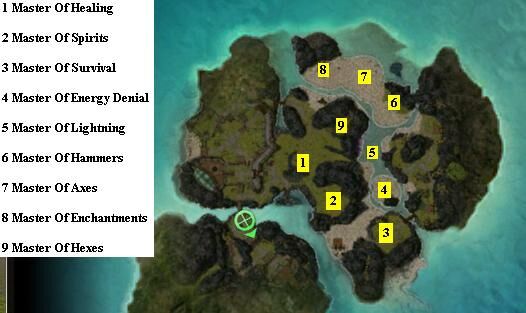 All NPCs on the Battle Isles belong to the Zaishen Order.

There are both friendly and hostile NPCs. The friendly NPCs provide the player with information about the game mechanics. The hostile NPCs are sparring partners for training purpose. Killing them will not earn you any XP and they don't drop any loot.

All NPCs - both friendly and hostile - respawn in their original location if they are killed.

Will ship you to the Random Arena