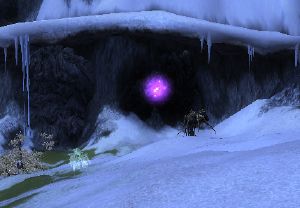 Chaos Rift in Jaya Bluffs surrounded by some enemies.

This is a mission entry. For information on the mission outpost Jaya Bluffs, see Jaya Bluffs.

This mission was available at the Dragon Festival.

Captain Rujiyo
"I am Captain Rujiyo of the Imperial Guard, appointed to this post by the emperor himself. We know little of the enemies invading Shing Jea Island, save that they are winning the battle. We must do everything in our power to swing the fight in our favor."
- How can I help the emperor?

Captain Rujiyo
"My troops have received reports rifts opening across in the mountains of Jaya Bluffs. The enemy is using these portals to summon troops to storm the island. We've called for additional forces, but they won't arrive in time. We could use your help. Will you serve the emperor and destroy those rifs in Jaya Bluffs?"
- Yes, I am ready to help the emperor.
- Not right now, I'm busy.