From GuildWiki
(Redirected from Jennur's Horde)
Jump to: navigation, search 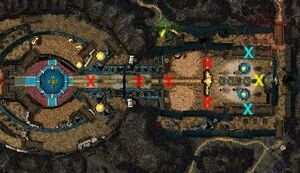 Koss must be in your party in order to enter this mission.

Defeat the Harbinger of Nightfall before it summons enough demons to destroy Seborhin.

The goal of this mission is to kill a Harbinger of Nightfall at the far east end, marked with a yellow X. It is invulnerable to all sources of damage except for dropping a Light of Seborhin near it, which will destroy the light and remove 1/3 of its lifeline. The Harbinger of Nightfall does not regenerate health even when out of combat, so three such lights will kill it.

Along the way in the mission are five other Harbingers, each marked with a red X. These are likewise invulnerable to all sources of damage except for Lights of Seborhin, but it takes only one light to kill them. Killing a Harbinger destroys the Light of Seborhin, but if a light is dropped far enough away from all Harbingers to not damage any, it can be picked up again and used later. Killing a Harbinger also grants a morale boost.

When a Harbinger is killed, a Spirit of Seborhin spawns in its place. Each spirit will create a Light of Seborhin, and if the one it creates is destroyed, will create another to replace it. This allows you to not have to go all the way back to the beginning of the mission every time you kill a Harbinger. The spirits are fairly fragile, and if one is killed, the light it created vanishes.

Several groups of five Margonites will be scattered throughout the map when you start the mission. In addition, every two minutes, a runner group of Margonites will spawn at the east end of the map and run westward. If left unimpeded, these will kill any Spirits of Seborhin they encounter, and eventually will kill Horticulturist Hinon, causing mission failure. As such, it is vital to intercept the runner groups.

The number of Margonites in a runner group depends on how many Harbingers have been killed. The groups start at 4 Margonites, with one added for each two Harbingers killed, up to a maximum of six Margonites.

Losing a Spirit of Seborhin or two will slow you down, as you must then run further to get lights, but it won't immediately cause mission failure. If you lose some spirits and have to run back further for lights, it may sometimes be necessary to do nothing but ferry lights between fighting consecutive runner groups.

Between the last two Harbingers is an impassible ditch. Margonites running westward will go around this ditch, and choose randomly whether to go to the north or to the south of it. Make sure that you don't let a group slip by on one side while you fight on the other. It can also be useful to grab the Margonite group immediately east of the ditch and pull them to your side without aggroing either of the harbingers, in order to create more room for the Spirits of Seborhin that will later be created by killing the Harbingers.

At the far east end of the mission, be aware that it is easy to pull two stationary groups at once, as fighting up in the bonus area can pull the group down below or vice versa. This can be avoided if you pull the Margonite groups well back from their spawn points before killing them.

The usual strategy is to advance eastward slowly, killing stationary groups as time allows until you have cleared all the way to the Harbinger of Nightfall. Ferry three lights to it and kill it to finish the mission. At the start of the mission, you have time to kill the first two Harbingers and a stationary Margonite group before the first runner group arrives, but don't try to do more than this.

Some players prefer instead to run past some of the early Harbingers without killing them, in order to reduce the size of the runner groups later in the mission.

To the north and south of the Harbinger of Nightfall, on the two large staircases, are two more Harbingers, each marked on the map with a blue X. Kill both of them, as well as the groups of Margonites that accompany them, in order to get master's reward. Note that the bonus requires you to kill their Margonite escorts, even though the bonus text doesn't specify this.

It can help to pull the Margonite groups down the stairs, away from the extra Harbingers. Depending on how fast you are, you may need to kill a few Margonites, run away to go intercept a runner group, and then come back again to finish that side. Both sides are done in the same manner.

Killing the bonus Harbingers does not increase the size of the Margonite runner groups.

Hard mode makes it much more important to pull only one group at a time. Be more cautious with pulling, and if you accidentally get an extra group that you didn't intend to, run away immediately. The bonus area is especially prone to make this happen, as a hero, henchman, pet, or minion wanders off and aggros a group down below. You can probably get away if you run immediately, but if you wait, you'll still have too many mobs on you when the runner group comes, which can lead to mission failure.

Even if you kill all of the harbingers, runner groups of six Margonites are still quite manageable in hard mode, and should still leave adequate time to usually kill another group between runner groups. It helps that the runner groups tend to bunch up, making them easy fodder for multi-target attacks.

Horticulturist Hinon: Normal attacks are useless against the Harbingers. We must rely on the power of the Light of Seborhin.

Horticulturist Hinon: Defend the Seborhin Spirits from those wretched demons! The Spirits can gather the Light of Seborhin into a form we can use to defeat the Harbingers!

Koss: So much of the garden has been corrupted . . .

<party leader>: More would have been lost had we not been here.

<party leader>: Better. The visions seem to have passed.

Koss: We had to come here. It was a real threat. You have to think things through to realize what's important.

<party leader>: I understand. And I think Melonni understands as well.

<party leader>: Agreed. But sometimes you have to think things through to realize what's important. Or who's important.

Koss: I suppose you're right. You think we should talk, her and I?

<party leader>: Yes. And you will, when the time is right.

Koss: For my sake, I hope that time is soon.

Margonite Reaper: Mistress? Is something wrong?

Prophet Varesh: The Ruptures. They have stopped.

Margonite Reaper: It matters not. When you free our lord, the Torment will wash over the world, transforming it.

Prophet Varesh: You are right. I can feel Abaddon's presence, like a weight in my mind. It is nearly overwhelming.

Margonite Reaper: Abaddon depends upon you. Would you hesitate now?

Prophet Varesh: No. No. Abaddon's will be done.

Margonite Reaper: It is, Mistress. And your reward is coming, when you weaken the last barriers. Hail Abaddon!