From GuildWiki
(Redirected from Jokanur Diggings)
Jump to: navigation, search 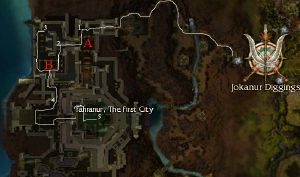 The primary objective is to work your way through Fahranur, The First City to discover what was unearthed in the excavations and has begun killing the diggers. You discover it to be, and are then required to kill, the Apocrypha, which appears to be a living tablet inscribed with a glowing purple symbol that can split into multiple pieces and take the general form of an elemental.

There are three tests which much be passed in order to gain access to the Apocraphya's area; each involves placing stone tablets on stone pedestals while navigating various obstacles. The first test involves chasing Darehk the Swift (who starts at Point 1); kill him to get a tablet, which must be placed on the first of the pedestals (Location A).

The second test requires running through flames of fire, finding two tablets (Points 2 & 3), and placing them on two more pedestals (Location B). The party will be pestered by the undead in the area and, for those interested in the bonus, avoid killing the Ghostly Sunspears who are guarding the tablets. Those same ghosts will also try to remove their respective tablets from the pedestals to return them to their original location. Work-around this by dropping the first tablet near a pedestal before going after the second, then quickly place each when you have acquired them both. This opens the second gate, allowing the party to proceed further.

The third test asks you to protect Kahdash (at Point 5), who carries the remaining tablet to the final pedestal to unlock the last of the gates. If you survived the first two tests, this one will present little trouble. Similarly, defeating the Apocrypha and its undead guards should be relatively easy.

Along the way, the party must also deal with the city's booby-traps: there are pillars shooting Madness Darts, which cause -1 health degeneration for 10 seconds; the crushers cause instant death (but no DP); and flame jets in the area of the second test, which cause fire damage, burning, and crippling.

Finally, undead foes will cause Disease, which can spread to party members (including Kormir) and put extra pressure on your healers. Try to stay spread out so as not to infect the entire party.

The bonus is to avoid allowing the deaths of the two Sunspear Ghosts, who walk around the stone tablets in the second chamber. They won't attack you, so you can run away once you have the tablet. Heroes can readily be flagged away from the ghosts if needed, but Kormir will attack them and can only be pulled away from them. Pets can be temporarily set to avoid combat, though minions and spirits cannot; use caution if taking them along. As long as the ghosts do not die, you will complete the bonus.

The Sunspear Ghosts will attempt to take the stone tablets back to their original position once they are on their pedestal. As noted above, gather both tablets at Location B before attempting to place them on the pedestals; even if the ghosts take them, the gate will have opened and the party can continue.

However, even if you made it this far without killing either ghost, there are still two ways to lose the bonus: (1) if either ghost is killed by any minions or spirits left behind (or if Kormir follows too slowly) or if Kadash, of the third test, dies. In either case, the mission status does not always update properly, so it might appear that you are still in running for the bonus, even after it has been lost.

It helps immensely to have two healers, as mobs cause disease with Tainted Flesh, which can put a lot of pressure on a single healer. Most mobs are undead, and thus handily destroyed by holy damage; your healers can pitch in on this with some smiting skills if desired.

Kormir: The diggers were excavating the ruins west of here. That is where we must go.

Melonni: I have never seen anything quite like these markings. What did this to the diggers?

Kormir: I cannot say, but I am certain we will find their killer in the ruins. We will find it, and we will destroy it.

Ghostly Sunspear Commander: Your name means nothing to me. I'll warn you as I've warned the others: Death stalks these dusty halls. You must not enter!

Kormir: The centuries have addled your senses, phantom. We are Sunspears. We shall pass with or without your permission!

Darehk the Quick: The chamber is sealed. I will not allow you entry.

Kormir: If you will not give us the key wilingly, we will be forced to take it from you.

Kormir: This next champer will also be sealed. We'll need two tablets to open it.

Melonni: Kormir, how do you know so much about this place?

Kormir: A Spearmarshal's duties do not end on the battlefield. Come, we must find the stone tablets.

Kormir: Excellent work! We must continue. The third trial awaits.

Kormir: We are here to destroy what lies within the inner chamber. Stand aside, specter.

Kahdash: The inner chamber is sealed with good reason. Others have come before you, but the evil of the Apocrypha remains.

Melonni: If you truly oppose this "Apocrypha" you will help us destroy it. Please. Our enemies are the same. Let us work together.

Kahdash: Your words ring true. Very well, I shall help you. I will place this tablet back on the pedestal, but I need your protection to succeed.

Melonni: Thank you, Kahdash. I promise that we will not rest until the evil is driven from this place.

Kormir: Whatever that abomination is, we will defeat it! Sunspears, forward!

General Morgahn: You were correct, Warmarshal. The Sunspears have been recruiting and training new leaders.

Varesh: We will need to increase our own forces as well.

Varesh: If they serve all of Elona, why are the headquarters here, in Istan, instead of Kourna?

General Morgahn: Your father taught me to trust the Sunspears.

Varesh: My father taught me to do what is necessary to protect my land.

Varesh: Prepare for our return to Kourna. I shall join you shortly.

General Kahyet: He is a loyal old fool.

General Kahyet: The Apocrypha has been destroyed by the Sunspears. But not before I gained what we needed from it.