Warning: The following text contains spoilers relating to the plot of the Prophecies Campaign.

Justiciar Hablion is a leader of the White Mantle. A powerful knight of the distinguished rank Justiciar and a religious zealot, Hablion is an imposing figure.

Jusiciar Hablion is first encountered near the end of the Gates of Kryta mission. Players aid him in his fight against the undead that plague Kryta. In return, Hablion gives the Ascalons permission to settle down in Kryta, who end up in the Ascalon Settlement. After the events of the Divinity Coast mission it is assumed that he led a group of White Mantle into the Maguuma Jungle, to rescue the Chosen.

During The Rise of the White Mantle:

"The swamp is still befouled. Clear out the undead." 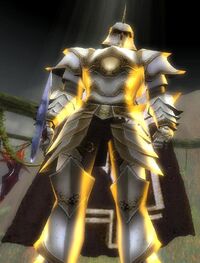 Hablion in the Bloodstone Fen

Despite his supportive and compassionate facade in the Gates of Kryta mission and the Divinity Coast mission, Hablion is exposed to be the ruthless executioner who murders the Chosen on the Bloodstone deep in Maguuma Jungle to serve the Unseen Ones. This revelation in the Bloodstone Fen mission ends with the demise of Justiciar Hablion. His death inspires a terrible rage in the White Mantle, and as a group begin to hunt the Shining Blade mercilessly in revenge.