This area of Cantha's sprawling northern metropolis is also sometimes called "Old Kaineng" and is usually among the first stops of visitors to the Empire of the Dragon. Before the Jade Wind, the place now called Kaineng Center actually comprised most of Kaineng City, but the ensuing population explosion as citizens fled the affected regions led to an equal expansion of metropolitan boundaries. The central district's new, official moniker was approved by imperial decree in 1408 CC.

Kaineng Center is a town on the northwestern coast of Cantha. It is the economic center of the Kaineng City region. From its piers, ships set sail to the ports of other lands (i.e. the Battle Isles and other campaigns). 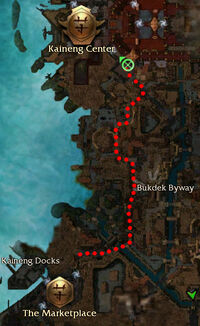 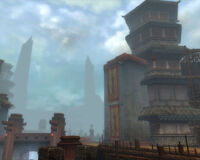 Factions Campaign characters must travel north from The Marketplace through Bukdek Byway. This is a very easy run if the optimal route is taken (see map on the right). Curiously, the primary quest chain will not create an explicit need to visit Kaineng Center until much later in the campaign, so you will need to take your own initiative to get here in a timely fashion.

Prophecies Campaign characters can get to Kaineng Center through talking to Jiaju Tai in Lion's Arch after completing the Mhenlo's Request quest.

Nightfall Campaign characters can get to Kaineng Center through talking to Funwa Shento in Kamadan after completing The Time is Nigh quest.

For characters of other campaigns, they will land at Bejunkan Pier, so will need to travel southeast to enter.