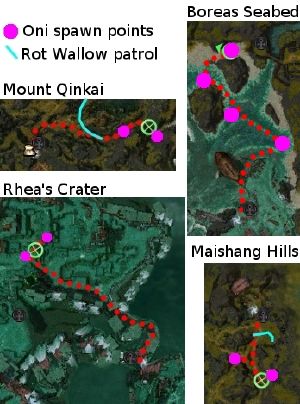 All oni spawns consist of 3–4 oni (in the Rhea's Crater farm, the same bridge twice triggers two groups). (The best rates below do not take into account rezoning times.)

Boreas Seabed
From Zos Shivros Channel, head towards Sskai, Dragon's Birth, where you will find a group of oni just to the south of his group. There is a second group directly west from Sskai, next to the large rock formation. A third group can be found by skirting the formation to the northwest, and a fourth group will pop up just west of the resurrection shrine to the northwest. All of these groups can be reached without aggroing anything more than a couple Kraken Spawn (which you may want to kill off first, so your spirits don't get distracted). (Best rate: 5 min/4 groups = 1.25 min/grp.)

Mount Qinkai
Leave Aspenwood Gate, cross the bridge, and follow the southern edge of the area to the east. You will encounter a patrol of Rot Wallows, but if you stay back, they will turn and head north. There are 2 spawns of oni to the east, on the way to the beach. (Best rate: 3 min/2 groups = 1.5 min/grp.)

Maishang Hills
Head directly south from Eredon Terrace (the Rot Wallow patrol will head west and are easy to avoid) into the narrow valley. One group of oni can be found on the path that leads up the western edge of this valley, and a second group appears in a small dell on the eastern edge of the area slightly to the south. (Best rate: 2 min/2 groups = 1.00 min/grp.)

Rhea's Crater
Solo players should bring a team of heroes/henchmen to help reach the farming spot here. Head northeast from The Aurios Mines and follow the path through a couple groups of Rockhide Dragons. Then, bear left and follow the wall, taking out Lorelle Jade Cutter along the way, until you come to an uphill path with a bridge at the top. At this point, solo players should send their H/H teammates back the way you came until they are off the radar. Cross the bridge to the northeast and you will trigger a double-spawn of oni (6–8) at the far end of the bridge. After dispatching them, step off the bridge, then re-cross the bridge to trigger another double-spawn on the southwest end. This is probably the most efficient farm for larger parties. (Best rate: 5 min/4 groups = 1.25 min/grp.)