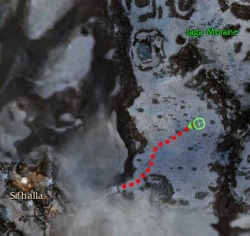 "Krak Flamewhip, a notoriously cruel Stone Summit Dwarf, has mobilized a mounted unit that has been wreakin' havoc on us Deldrimor. He and his stooges have been sighted in Jaga Moraine. You'd be doin' us a heck of a favor if ya put a hurtin' on 'em."

Accept: "I'll flamewhip him good."
Reject: "I'd rather put my feet up."

"So you put out Flamewhip's fire, eh? If you were two feet shorter I'd kiss ya! Budger'll be especially thrilled. He's got a long, unpleasant history with Krak. We'll be celebratin' tonight!"

Exit from Sifhalla into Jaga Moraine and head north-east. Krak's cavalry can be found by looking south of the resurrection shrine where Gunnleif stands, or if you wait at the shrine they will eventually find their way to you. Krak is a Warrior and so are most of his cavalry.