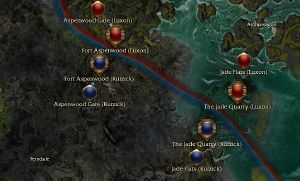 The Kurzick-Luxon border is a blue and red line shown on the Canthan World Map. This line separates Kurzick and Luxon territories. Depending on how either side is performing in Alliance Battles the line will move from one Faction's territory to the other. All land on the red side of the border is controlled by the Luxons and all lands on the blue side are controlled by Kurzicks. The border position is shared by all territories, and is updated every 3 hours. When the border is updated 5 Luxon Guards will charge into every outpost that was held by the Kurzicks before the border moved and 5 Kurzick Guards will charge into every outpost that was held by the Luxons before the border moved. These guards will then fight with the 5 guards defending the outpost. If the outpost has changed allegiance then the attacking guards will win, if the outpost is still owned by the same faction as it was before the border moved then the 5 guards defending the outpost will win.

When either side controls a town, this will affect players allied with the opposite side as follows:

As the line moves, it affects Alliance Battle maps. The deeper it is into a given factions side the more of an advantage they have. For example, If the line was progressing very close to House zu Heltzer the Kurzicks would have a major advantage, as would the Luxons if the line was nearing Cavalon.

Note that only normal outposts that are not adjacent to a competitive mission location (Jade Flats or Aspenwood Gate) can be taken over by opposing factions. Towns and Missions of any kind do not ever switch control to the opposing factions. For example, if the Kurzicks take over Leviathan Pits, Unwaking Waters (Luxon) will still be a Luxon outpost, completely encircled deep inside Kurzick territory.

The maximum number of outposts on each side that can be taken over is six, with the deepest capturable towns being Tanglewood Copse for Echovald Forest and Breaker Hollow for Jade Sea. 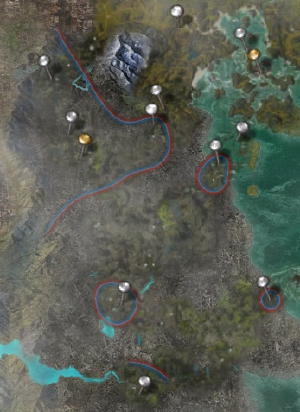 Deepest possible position of the border on the Kurzick side 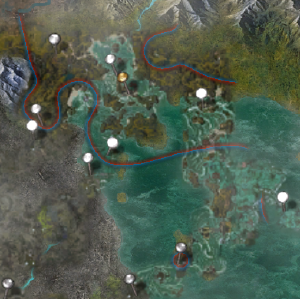 Deepest possible position of the border on the Luxon side
Retrieved from "https://guildwiki.gamepedia.com/index.php?title=Kurzick-Luxon_border&oldid=1582929"
Category: