From GuildWiki
(Redirected from Kurzick Settlement)
Jump to: navigation, search 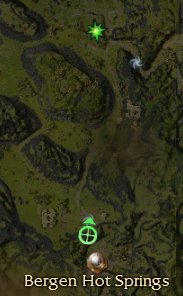 Location of the Kurzick refugee settlement

After arriving in Kryta from Cantha on board Captain Yimuru's ship the Wind Dancer, the Kurzick refugees began establishing a Kurzick Refugee Settlement in Nebo Terrace. Unfortunately, their chosen location was ill-advised, as the area was swarming with undead.

This menace was cleared and now the Kurzicks have settled into a nice quaint spot.

The Kurzick Settlement existed for around 3 weeks before Factions came out. It no longer exists.

The Settlement is not a town or outpost, so you can not map travel there. The easiest way to get there is going straight north from Bergen Hot Springs. Nebo Village is very close, but not an town or outpost either.

The Settlement is built around a Statue of Dwayna, which pre- and postdates the settlement.

The Kurzick Settlement was introduced briefly as an introduction to the Luxon and Kurzick peoples. After the release of Guild Wars Factions, the site was removed from the game