Lair of the Forgotten

Time has not been kind to this last bastion of a once-great empire. The erosion caused by the outward creep of the Realm of Torment has eaten away at the very foundations of this forgotten citadel, dropping much of it into a vast sinkhole. It is said the lone living witness to the Margonite assault on the Gates of Heaven and Abaddon's defeat at the hands of the Five Gods still resides here, all but abandoned to the mists of time.

From the Bone Palace, exit into Joko's Domain, then use the Junundu to head north, to the exit into the Shattered Ravines in the center of the explorable area. Once there, head in a general north-by-northeast direction. The Lair of the Forgotten lies near the center of the northern edge. 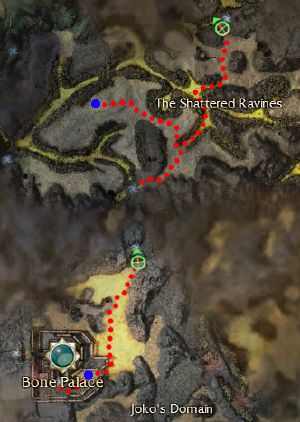 Lair of the Forgotten[edit | edit source]